Rekkles shows off jaw-dropping full sleeve, chest, and back tattoos

And his cute Kirby hat. 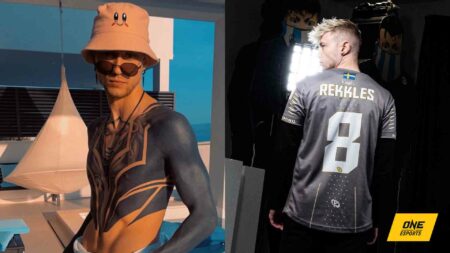 Karmine Corp’s bot laner Carl Martin Erik “Rekkles” Larsson is on a well-deserved break after he and his team had a successful season together, finishing first at the recent European Masters (EU Masters) 2022 Spring Main Event, and third place at the LFL 2022 Spring Playoffs.

The former G2 Esports AD carry left the team and the LEC after a disappointing 2021 Summer season where they failed to qualify for Worlds, finishing fourth in the playoffs.

On an early summer holiday in Croatia, he posted photographs showing off his new full sleeves, chest, and back tattoos on Twitter, which covers up his previous tattoos entirely, including the iconic “Rekkles” on his right arm.

Posing in a nothing but a towel, sunglasses and a Kirby hat by the pool, Rekkles showed off his toned abs, arms and chest that sport new colors.

Both of his arms are now fully colored in dark ink end to end, and lead into a chest piece depicting a hooded female face with closed eyes, reminiscent of Riot Games’ League of Legends Summoners who conjure champions on the Rift.

Connected by the arms, his back also showcases three genderless faces with glowing eyes in a triangular position, in various detailed tones of black ink.

Previously, the superstar bot laner was famous for showing off his trademark “Rekkles” tattoo on his right forearm in the LEC and at international events, such as this one at Worlds 2018.

By 2019, still competing with Fnatic, he had full sleeves done on both arms with intricate artwork that incorporated his original forearm designs.

He kept these sleeves throughout 2021 when he joined G2 Esports, but has since covered them up entirely with solid black ink in his latest reveal.

READ MORE: T1 Faker to Zeus: ‘You have to draw attention to become a world-class superstar’