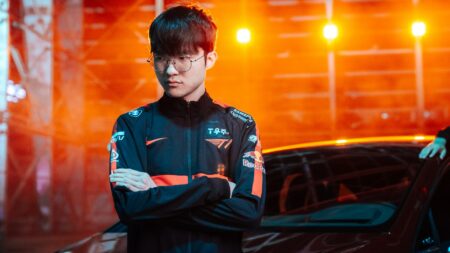 The conclusion of this year’s Mid-Season Invitational (MSI 2022) was not what fans of League of Legends Champions Korea (LCK) expected after T1 lost to Chinese representative Royal Never Give Up 2-3.

Apart from the team’s coaching staff and their questionable game five draft, fans had also blamed T1 star player Lee “Faker” Sang-hyeok for the devastating loss. He is the most experienced player on the roster and has competed several times on the international stage with plenty of titles to his name, which includes being a back-to-back MSI champion in 2016 and 2017.

The T1 player is in the middle of a defamation suit after their MSI run. An anonymous LoL fan created an anti-Faker community page, spreading hate against the mid laner in the popular South Korean internet forum, DCInside.

T1’s legal team immediately took action and contacted the management of the forum page, according to a report by OSEN Korea. They asked the administrators to delete all threads and posts with offensive content against their star player and to forward the related files to the authorities to be used as evidence in court.

A lawyer from the T1 legal team also promised to be more proactive in responding to attacks against all their players, especially since the LCK Summer Split 2022 has begun.

Earlier in March, Faker expressed his frustration about LPL pro players feeding in the Korean Challenger solo queue after Top Esports’ top laner Yu “Qingtian” Zi-Han went 0-16 in one of his ranked games.

Riot Games took action and removed some of these Riot Super accounts, limiting the number of foreign accounts that can queue up on the Korean server, which riled up the Chinese League of Legends community.

When Faker commented that “no players stood out” to him at MSI during the post-final press conference since he was focused on their own performance, LPL fans had also expressed disdain.

How will T1 fare in the Summer Split? Fans can follow their journey through the regular season on the official English and Korean Twitch LCK channels.