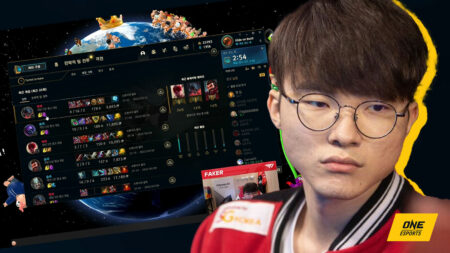 There’s a persistent problem in Korean solo queue ladder according to legendary T1 mid laner Lee “Faker” Sang-hyeok, and he’s exasperated about the lack of solutions.

After Top Esports’ top laner Yu “Qingtian” Zi-Han went 0-16 in one of his ranked games, the 25-year-old mid laner shared his frustrations about LPL pro players feeding in the Korean Challenger solo queue on his livestream.

Later, the two players queued up in the same team again and this time, the game went far better for everyone.

During the game yesterday, Faker grew increasingly frustrated at the player on Aatrox, who eventually went 0-16.

“[The Aatrox] throws again and he even has a bad mentality!” Faker said, according to a text translation on the livestream. The Top Esports substitute top laner had apparently repeatedly called for surrender and refused to listen to teammates’ calls, on top of his high number of deaths.

The mid laner appeared frustrated, and said, “This is the kind of player that I hate most, but I guess Riot’s fine with these guys”. Although his tone was calm, he was clearly unhappy, stating that he’d report the player after the game.

Later on, he expressed his feelings about LPL pro players on the Korean server. “To be honest, I don’t understand why Chinese pros are allowed Riot Super accounts in the first place,” said Faker.

He pointed out that the issue of several Chinese pro players intentionally feeding in games and being toxic has been ongoing since 2015.

“Riot should ban these accounts if they’re going to play like that.”

He even said that he’d boycott solo queue if he met someone acting like that again.

The T1 player met Qingtian in his next game, but this time, the game went more smoothly. Faker played Diana jungle and focused the top lane, placing the Rift Herald there and helping Qingtian’s Graves to a 5/1/3 KDA.

“If I don’t help him, he might die 16 times again,” he said at the start of the game. Afterwards, he commented, “Look how good he is when he plays properly… he should be professional.”

Qingtian subsequently wrote an apology on Weibo. “Early this morning, I made a mistake during a ranked game. The team and league have both given me guidance, and I am deeply remorseful,” he wrote.

“As a pro player, I need to maintain professionalism on the Rift, and will accept all penalties from the league and org.”

“I’d like to take the opportunity to apologize to the nine other players in that game… I’ll be sure to take every game seriously from now on.”

Meanwhile, Top Esports announced that it will cooperate with the league in investigations and will deduct Qingtian’s salary for the month in accordance with the league’s rules. It’ll also step up its supervision from now on.

You can watch Faker’s full livestream on Twitch.