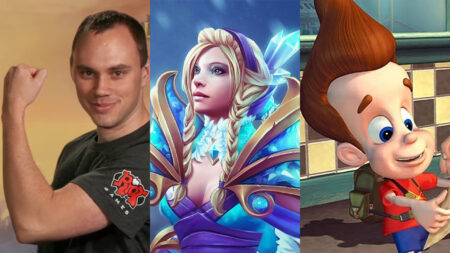 League of Legends is over a decade old, leaving a lot of time for the developers to play around with secret additions to the game. Whether it be quirky jokes or special interactions, Riot Games does a great job entertaining eagle-eyed gamers with some hidden-in-plain-sight Easter eggs.

Here are seven Easter eggs in League of Legends that might surprise new and old fans alike.

7. LS is immortalized by his favorite item

A recent addition to the game, LoL content creator Nick “LS” De Cesare now has his own Easter egg in the game featuring his favorite item.

Known for his diehard devotion to Liandry’s Torment, Riot Games turned the Liandry’s Salesman into a keyword for the item. If you search “last shadow” (LS’s original in-game name) in the shop, the item’s newest iteration, Liandry’s Anguish, will pop up.

Funnily enough, the item’s counterpart, Morellonomicon, also pops up as the second item, commemorating the longstanding debate between the two magic items.

You can watch LS’s reaction to his own Easter egg here.

6. Trinity Force does ‘tons of damage’

If you’ve been playing League of Legends since its 2009 release, you might remember Riot Games commentator David “Phreak” Turley’s frequent antics during Champion Spotlights and patch reviews.

With Phreak raving about his favorite item Trinity Force and how it does “tons of damage” in every situation, Riot Games slid in a solid Easter egg for the longtime LoL community by adding Phreak’s timeless catchphrase as a shop keyword for the Mythic item.

If you’re a fairly new LoL player and missed out on the trend, here’s a video to show you how often Phreak used the iconic saying.

5. Jimmy Neutron is in League of Legends

What does a boy genius with wicked hair and a robot dog have in common with a MOBA? One item apparently.

Classic Nickelodeon show Jimmy Neutron is an actual Easter egg in League of Legends, but you’ll only catch it if you’re familiar with the show and its characters. If you type in “Jimmy Neutron” in the shop search bar, the epic item Sheen will instantly appear, but why?

One of Jimmy’s best friends is named Sheen Estévez, making him the one and only connection between Retroville and Runeterra.

While it might seem like quite a small detail for an Easter egg, fans of both franchises can let out a quick chuckle every time they build up to a Trinity Force.

4. Caitlyn and Vi have a secret Piltover police buff

As Piltover’s best crime fighters, Caitlyn and Vi actually have a vigilant Easter egg in the form of an in-game buff.

If you draft the police duo into a game, you’ll be greeted with a unique On The Case buff with the brief description of “Piltover’s Finest.” Upon further investigation in community forums, the buff provides both champions with 1 more gold whenever the two work together to score a takedown.

It might not seem like much, but it puts a charming incentive for this Piltover posse to coordinate some hot pursuits on the Rift.

This one is another cheeky Easter egg in the form of a cosmetic buff that works around Leona’s passive Sunlight.

With Leona using the power of the sun to have allies deal more damage, naturally, any champions that wear sunglasses secretly receive -1 damage from any form of Sunlight damage.

While the clever Easter egg works on default champion skins like Vayne, Riot has gone all the way to include specific skins like the Commando skin line and Surfer Singed to fend off those harmful UV rays.

2. Control wards get an interesting buff for staying alive

While most special interactions and buffs revolve around champions, the Control Ward actually has a special Easter egg that could trigger in any game you play.

Staying true to its duty of revealing vision wards and camouflaged champions, the simple Control Ward gets a special buff titled the “Distinguished Order of Ward Longevity and Health” once it has been alive for two minutes and 30 seconds.

It even has an interesting description that expounds on the lore of these long-lasting wards.

“It has persisted for eons in ward years and joins an ancient regal order of Wards that have lasted a really really really long time,” states the in-game description.

You can see one of these legendary wards in action during a JDG vs RNG match here.

1. Rylai’s Crystal Scepter is named after a Dota character

The debate over which is the better PC MOBA will have fans grabbing their pitchforks in defense of League of Legends or Dota 2, but no one can deny that LoL owes a lot to the original Defense of the Ancients (DotA) game.

With DotA being an influence on the game through designers like Steve “Guinsoo” Feak who also developed DotA: Allstars, League of Legends has an Easter egg dedicated to one of Dota’s iconic supports in the item Rylai’s Crystal Scepter.

Rylai is the first name of the Crystal Maiden, a support character that is known for her strong ice-based disables and slows. With the Crystal Scepter dedicated to the hero, the item’s unique Rimefrost passive lives up to the name by slowing units down affected by ability damage.

On top of the similar gameplay, the icon of Rylai’s Crystal Scepter bears similarities to CM’s original icon for Brillance Aura. Coincidence? I think not.