Uncle Dawei is here, and he’s brought gifts for every traveler!

It’s been two years since the launch of HoYoverse’s open-world role-playing game, Genshin Impact. Since then, the game has broken numerous records, and released four regions and 54 playable characters.

Of course, its huge success won’t be possible without the support of its players, who helped make Genshin Impact the billion-dollar game that it is today. To give back to all travelers, the developers are giving away tons of freebies and rewards during the Genshin Impact anniversary 2022 celebration.

Here’s everything you need to know about it, including its date, rewards and gifts, banners, and web giveaways.

HoYoverse is giving away a total of 1,600 Primogems during version 3.1’s Of Travels and Treasures: A Thank-You Gift, which guarantees travelers 10 wishes.

Simply log in from September 28 to October 1 and you will receive the following items via the in-game mail:

Each mail can be collected until the end of the event. 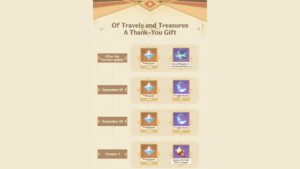 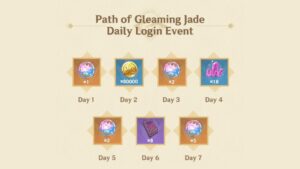 Travelers can receive more freebies when they login for seven days during Path of Gleaming Jade, which runs from October 14 until October 31. Note that only players who have reached Adventure Rank level 5 or above can participate in this daily login event.

Will there be a free 5-star during the Genshin Impact anniversary?

Unfortunately, HoYoverse won’t be giving out a free 5-star character or weapon during their second anniversary.

Players can still get a 5-star character of their choice in the featured anniversary banners. 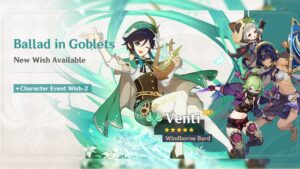 Character banners Twilight Arbiter and Ballad in Goblets will be available during the celebration, featuring 5-stars Cyno and Venti along with 4-star characters Sayu, Candace, and Kuki Shinobu.

Watch the full “Melody of Dreamlike Wanderings” video on HoYoLAB and leave the name of your favorite track in the comments section.

HoYoverse will issue redemption codes via HoYoLAB’s forum message feature within 7 days after the event ends. Winners can redeem the received codes on the Genshin Impact official website or in-game.

Prove That You Are a Traveler in One Sentence

Post a text (no more than 50 words) such as a line from the game or your gaming experience with the hashtag #IAmTraveler. A total of 1,000 participants will win 160x Primogems once their identities have been acknowledged by Paimon.

Travelers must set their accounts and posts to public.

Prove That You Are a Traveler in One Picture

Post a photo from inside or outside the game with the hashtag #IAmTraveler. Participants are guaranteed 160x Primogems and an additional 20,000 Mora to 1,000 lucky travelers.

Remember to set your account and posts to public to be acknowledged by Paimon.