How to get Cursed Blade, a free weapon for Kazuha in Genshin Impact

A sword worthy of the wandering samurai. 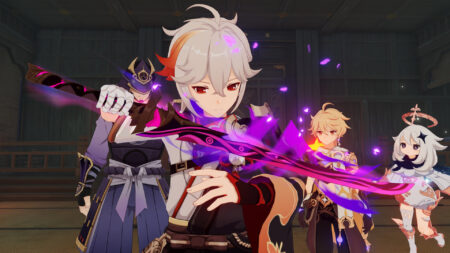 The mysterious weapon will debut in the version 2.8 update, which permanently introduces the character’s first ever story quest in the game.

Kazuha is a 5-star Anemo character and a wandering samurai from Inazuma. We first see him as a trainee on captain Beidou’s Crux Fleet ship after he escaped from the Raiden Shogun’s vision hunt decree.

If you happen to get him on his running character banner, your next task is to level him up and find a good sword for him to use in battles. To help players with their weapon dilemma, HoYoverse is giving away Kazuha’s 4-star weapon for free.

This 4-star sword is an exclusive reward given to players who complete and take part in Kaedehara Kazuha’s story quest, Acer Palmatum Chapter – Act I “A Strange and Friendless Road”.

Upon meeting the requirements and criteria for the quest, go to the Story Quests tab and use one of your keys to unlock Kazuha’s Acer Palmatum Chapter: Act 1.

Here are the materials you’ll be needing to ascend this 4-star weapon.

When a normal, charged, or plunging attack hits an opponent, this 4-star sword will whip up a Hewing Gale, dealing AoE DMG equal to 180% of ATK and increasing ATK by 15% for 8s. This effect can be triggered once every 8s.