Our writer can’t stop playing it. 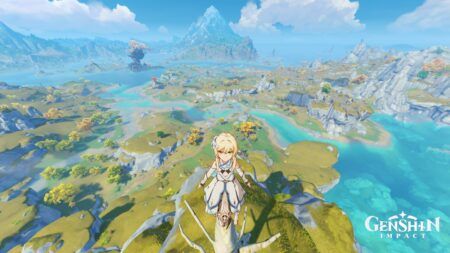 Worlds 2020 is in full swing, the MPL playoffs are about to start, and Valorant Act III is coming out next week. And yet the most exciting thing in my life right now is a free-to-play MMO RPG.

I’ve been playing the game for a week now and I can honestly say that the game is an unexpected masterpiece.

For those of you who are out of the loop, Genshin Impact is an online multiplayer RPG by Chinese developer miHoYo that brings you into the colorful world of Teyvat. From blowing monsters away with whirlwinds to cooking some hearty meals for your party, the immersion of the Teyvat realm stands out from any online game I’ve played before.

The World of Teyvat

The game starts off on the trope of a hero’s journey. After the inciting incident of losing your brother/sister in a fight against a god, you find yourself in the outskirts of Mondstadt with Paimon, your guide, and Genshin’s trademark icon. You meet some side-characters like Amber and Venti who join your party and essentially pave the way to the simple yet interesting plot of Mondstadt’s dragon problem.

The game’s lore is nothing short of breathtaking. The world-building is a canonical sensation that still leaves so much open to play with. You first have Mondstadt, a medieval-influenced city-state that worships the Anemo Archon, Barbatos, and later on, you discover Liyue Harbor, a more oriental nation that worships the Geo Archon, Rex Lapis. With five more elements to go, I’m sure the developers are already making plans to expand the world with five more nations.

As for the characters, I must praise the developers for fleshing out their roster with elaborate character design and expressive voice-acting. While the main character rarely says anything, you are immediately struck by Paimon’s inquisitive nature and your party member’s little quips when out on the road. On top of that, adding voices to minor characters like Adventurer’s Guild receptionist Katheryne just adds another layer of life to everything that goes on.

In terms of its environmental qualities, Genshin Impact is a sight to behold. From Mondstadt’s green pastures to Liyue’s rocky ranges, the game is only at its early stages and never ceases to amaze me graphically. While you may have two major cities in Liyue and Mondstadt, you get to discover quainter abodes in areas like Springvale and Qingce Village, giving you the aesthetic foil between urban and countryside locations. With oculi to capture and treasure puzzles like the Three Divine Birds to decode, you’ll always be getting a fantastic, nature-filled view of Teyvat.

On a very important side-note as a musician, the music and soundtrack to this game is one-of-a-kind. While I had my suspicions of Genshin being another boring MMO with pay-to-play mechanics and a bland world, I was easily proven wrong once I got into the thick of it.

To smack a harmonious swelling of instruments into a well-executed world experience, Genshin Impact showcases nothing but love and care to its immersive universe. Even when crossing borders, you can hear the usual Mondstadt piano fade into a soft and eloquent Erhu at Liyue Harbor. With such beautiful attention to emitting a feeling of cultural assimilation to its fictional backdrop, I feel welcomed to a world that I can lose my countless hours in.

The gameplay and the grind

While the game starts out with some simple tutorials, it perfectly encapsulates the gameplay experience that you will get sucked into. It doesn’t lock you into these railroad missions, but rather it lets you do what all players want to do: roam around.

For the first hour, I just found myself clearing hilichurl camps for fun and the story did not once impede the action. While you are level-locked to Mondstadt until around adventure rank 16, the usual level grind becomes very satisfying, to say the least.

The game is built around a solid pathway of ascension. You must level your adventure rank, your characters, their weapons/artifacts, and also go around collecting oculi that help improve stamina and grant you EXP. On top of that, your world level increases throughout your ranks, giving you stronger and harder enemies in the wilderness. Although it might be a lot to handle in the first few sittings, it gradually becomes more tameable in the later stages. Essentially, Genshin does its best to be the perfect blend of difficulty and critical thinking that entices players to say “that quest wasn’t so hard, let’s move on to the next one.”

The combat system is very promising and rewards those who pay close attention to it. Aside from your usual hack-and-slash gameplay, enemies have elemental qualities that you can counter so combat becomes an ebb-and-flow between you and your party members. When facing a Cryo Abyss Mage, you must equip a pyro member like Amber to burn them down and you can easily switch to an Anemo character like Sucrose to add some swift damage to the flames.

To add another layer of depth to your battle, you can equip artifact sets that significantly increase your pyro damage to burn down cryo slimes or increase your health and defense to not feel so helpless against Ruin Hunters. While it may seem complicated at first, it easily becomes second-nature when you have a handful of elements in your party and it becomes an actual achievement to be able to pair elements like hydro and cryo for a deadly freeze combo.

The multiplayer side of the game

While it may be considered an online multiplayer game, Genshin only becomes multiplayer once you reach Adventure Rank 16. By that point, you can only play up to a party of four in one world so you won’t even encounter the massive crowds you usually see in MMOs. While some may be turned off from delayed and limited multiplayer, it teaches a sense of discipline to the ordinary player.

Though I was critical about the game’s necessity to play alone at first, I came to a realization that the individual level-grind became a primary task to the game. Once you’ve powered through the main storyline and side quests to level up and collect your party members, not much is left to do except to raid the exceptionally difficult ruins and fight the lvl. 30+ elemental hypostases. Now that the game allows to party up with strangers and friends, the game continues its large-scale action with actual companions.

Though I’m already AR 26, I had a blast just escorting my friends through the entire map, collecting oculi and showing them how to finish specific puzzles. And now that your friends control the other elements on the fly, party attacks become seamless in battle and provide players with that barrage of damage that you lack when you play by yourself.

One improvement I would ask for is just a better integration of co-op into the game. As much as the singleplayer gameplay shines on its own, the game rarely reminds you that co-op is available. If the game could notify you when a friend is online or raiding ruins, it would help me grind the levels with someone rather than just using my time and resources for easy-grab world quests that hold minimal rewards.

Last, but not least, we have to talk about Genshin’s gacha/lootbox system. As miHoYo is also known for the Honkai Impact game series, many might wonder if the gacha system overstays its welcome in Genshin.

In my opinion, the gacha system barely makes a dent into the entire experience of the game. If you’re a newbie to games and you just want to have fun and fight enemy camps with friends, you can essentially do that and still have no reason to dive into the gacha system.

Of course, many of you reading this are probably hardcore gamers who like the idea of rolling better S-tier characters for a subtle flex to your friends and believe me, I understand (Fischl lvl. 40 with a Favonius Warbow). This is where you can truly go into the nitty-gritty of the gacha system.

With the gacha system using fates that can be bought with primogems, you can easily earn enough primogems to pay for a 10-roll. You can also purchase primogems with your cash and essentially pay your way to significantly boost your characters with duplicates and such, but the game itself is fine without it. The main storyline will provide you with most of the elements at your disposal (Lisa/Electro, Kaeya/Cryo, Amber/Pyro, Traveller/Anemo and Geo) so you can easily grind your way to a solid party of four.

As much as it gives you the opportunity and the accessibility to use your hard-earned primogems and your actual money for the gacha system, it never really forces you to do it. So if you’re scared that Genshin Impact is a pay-to-play/win kind of game, I can honestly say that it barely scratches the surface to the type of misdemeanors that EA does with the likes of Star Wars Battlefront II.

While some still see the game as a Breath of The Wild clone, it’s clearly more than just that. Sure, you see the similarities of the stamina bar and the cooking activities, but at least your weapons don’t break (checkmate, Nintendo).

On a more serious note, Genshin Impact provides players with a novel, online experience that feels so close to home. While the MMORPG genre has essentially disappeared with the advent of MOBAs like Dota 2 and FPS games like Valorant, Genshin Impact reinstates such RPG values into an online gaming community that is saturated with competitive gameplay.

If you happen to be a fan of Skyrim or even Breath of the Wild, give Genshin Impact just a week of your time and you’ll see what makes this game an unexpected masterpiece of 2020 that everyone can enjoy.

You can register for Genshin Impact through its official website.

READ MORE: An open-world Harry Potter RPG is being developed for next-gen consoles