This is the best way to play Arcane Jinx in Fortnite 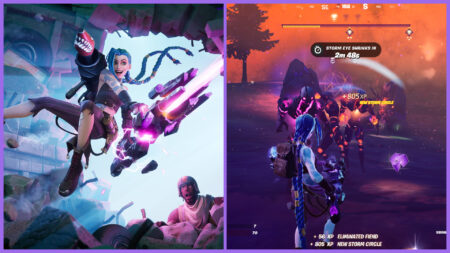 She left Pow-Pow and Fishbones on the Battle Bus!

Arcane Jinx is now in Fortnite as part of the expansive RiotX Arcane event, where thousands of players are equipping shotguns and assault rifles on the blue-haired gunner.

As a League of Legends champion that’s known for her trademark gunplay, here’s the best way to play Arcane Jinx in Fortnite. 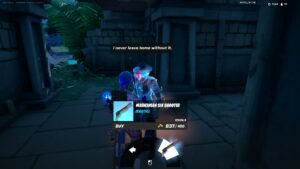 The perfect common weapon for Arcane Jinx is the newly-introduced combat pistol. Similar to her shock pistol, the combat pistol functions as a quick secondary weapon for close-quarters duels.

Players can also try out the Marksman Six Shooter, an exotic hitscan weapon that has a lethal headshot multiplier of 4x. You can pick this bad boy up for 400 Bars from Wrath at Stealthy Stronghold.

As for throwables, Jinx looks like the type to carry a few grenades and firefly jars, which mimic the effects of her Flame Chompers.

With assault rifles, shotguns, and SMGs off the table, the League of Legends champ’s next viable weapon is the Sideways minigun. Obtainable through Sideways chests, these bullet machines are the closest thing you’ll get to the champion’s minigun, Pow-Pow. Be careful though, the minigun has a tendency to overheat.

The final weapon that complements Jinx’s explosive persona is the rocket launcher. It is the rarest item in this collection, usually found in cosmic chests and supply drops, but it works well as a substitute to her Super Mega Death Rocket.

The coolest Fortnite cosmetics to use on Arcane Jinx 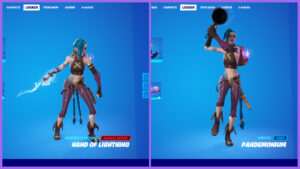 While Arcane Jinx does come with themed items, Fortnite has a ton of creative cosmetics that could easily fit the look of the Loose Cannon.

Players can fly in style by riding the Bombs Away! rocket or holding onto the Skellefish, a cosmetic glider that has actual fish bones.

Though she’s a bonafide marksman, Jinx can zap enemies up close with the Hand of Lightning harvesting tool, courtesy of Storm from X-Men.

An expert at stealing magical artifacts and disturbing everyone in Piltover and Zaun, the champion now has the power of the Rift with the Jones’ Field Pack cosmetic, and will surly cause a ruckus with the Pandemonium traversal emote.

If you’re able to grab the victory royale with this Arcane Jinx build, you’re a certified fan of both Fortnite and League of Legends.