But he won the game. 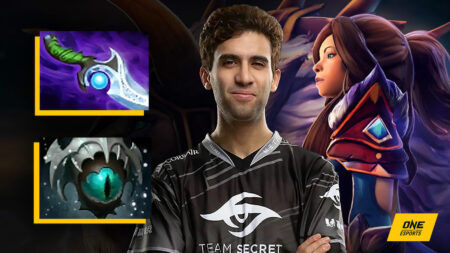 Team Secret’s position four, Yazied “YapzOr” Jaradat, is known for some off-the-walls support play—including position four Terrorblade and pioneering Aghanim’s Scepter Sniper in the pro scene. But his latest Mirana build is unorthodox even by his standards.

Forgoing points in Starstorm for stats? Rushing Diffusal Blade and Eye of Skadi, before finally stopping off for a Dragon Lance? If he didn’t do it in the first game against Team Liquid during the opening series of DPC Europe 2021/2022 Tour 2 Division I, which Secret eventually won 2-0, many would have thought he was trolling.

As recently as two weeks ago, he was still playing Mirana with a relatively standard build at the Gamers Galaxy Dota 2 Invitational Series Dubai 2022. So what changed?

Why buy Diffusal Blade and Eye of Skadi on Mirana?

Diffusal Blade, in this scenario, functions similarly as a replacement for Eul’s Scepter of Divinity, a common support Mirana item for its mana regeneration and arrow setup.

For what it’s worth, Diffusal Blade used to be an old-school Mirana build for players to easily land Sacred Arrows and deal right click damage. It’s not been done from a support position, but YapzOr does what YapzOr does.

In this game, YapzOr already has a ton of setup from his allies. Ember Spirit’s Sleight-Chains combo and Sand King’s Burrowstrike are fantastic initiation skills that let him follow up with an arrow. It helped that Secret’s position four seemed to have a preternatural sixth sense, with some outrageous long-range arrows finding the mark.

Eye of Skadi is a further complement to Diffusal Blade for more slow and stats. The spell-immunity piercing slow is great against heroes that rely on movement speed to get to where they want to be, and the healing reduction is useful against Enchantress’ Nature’s Attendants and Monkey King’s Jingu Mastery.

With this build, YapzOr prefers to stand at the outskirts of fights, throwing out a Sacred Arrow before dealing out a few right clicks. While it might not be as much damage as a double Starstorm nuke, it’s certainly safer. The 27-year-old had just one death in this game—the lowest of his entire team—and racked up three kills and 26 assists in the process.

His single death, during a fight for Roshan, showed how dangerous it was to get close. After getting caught in Tidehunter’s Ravage, it was swiftly followed by a Monkey King Boundless Strike, with no reprieve in sight for YapzOr.

By completely forgoing Starstorm and opting for stats, he’s slightly tankier and deals more damage with his right clicks. Plus, not using his first spell means he has more mana, which lets him go for the item build that lacks mana regeneration.

Starstorm can still be an incredibly valuable wave clear and farming tool, which most position fours tend to do. But during the game, YapzOr was constantly lower on the net worth charts, with his usual job taken over by captain Clement “Puppey” Ivanov’s Keeper of the Light. This meant that Mirana had less pressure to defend or keep lanes pushed out, letting YapzOr focus on whatever he thought he needed most.

Keeping a Wraith Band and Bracer till later in the game is also nice, since they are some of the most gold-efficient items in Dota 2 after 25 minutes. With his teammates soaking up most of the farm, any cheap item helps.

YapzOr is doing the same build in pubs

This isn’t a one-off game where YapzOr was trolling during a stomp. This was a close game against Liquid, the winners of last tour’s Regional League. Secret only started accruing a sizeable advantage after the first Roshan fight at 25 minutes, where YapzOr’s Sacred Arrows secure numerous key kills.

The 27-year-old has been playing this build consistently in pubs. Of his five Mirana games in matchmaking, winning three and losing two, all of them had the same item build up. Starting off with a Wraith Band, picking up Boots of Speed and a Bracer, before finishing his Diffusal Blade. He’s varied his second major item slightly, picking up Eye of Skadi, Butterfly, and Assault Cuirass in separate games.

Is this the new Mirana meta? If this no-Starstorm build can beat Team Liquid, it just might be, but you should be prepared for flame from your teammates.