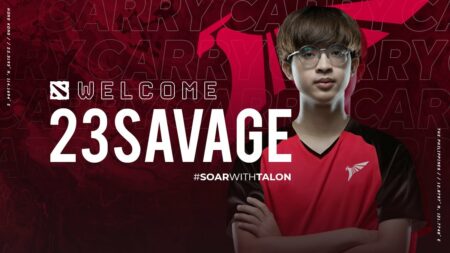 23savage is the new hard carry for the team, while Forev will take on his first coaching role following his unfortunate and untimely association with Omega Esports and the org’s former roster’s match fixing activities.

23savage last stood in for Thai organization Motivate Trust Gaming, and was previously with T1 and Fnatic. With T1, he was part of the roster that claimed a top-eight finish at The International 10, the first time a Southeast Asian team was in the top half of the TI field since TI6’s Fnatic.

The 19-year-old helped T1 to a third-place finish in the first season of the Dota Pro Circuit SEA 2021/2022 Div I, though was replaced by Kim “Gabbi” Villafuerte Santos for the Winter Regional Finals.

Talon Esports, which entered Dota 2 in the offseason, endured a disappointing debut in DPC SEA Div II. There were high expectations placed on the Talon Dota 2 all-star squad when they first entered the scene, but they ended up fifth, barely holding onto their spot in Div II.

Talon will need to battle their way out of the stacked SEA region to keep their hopes of a Major—and potential TI qualification—alive. Only Div I teams can earn invites to the Major, as well as accumulate DPC points based on their placement in the regional league.