Omniknight’s Heavenly Grace will never be the same again 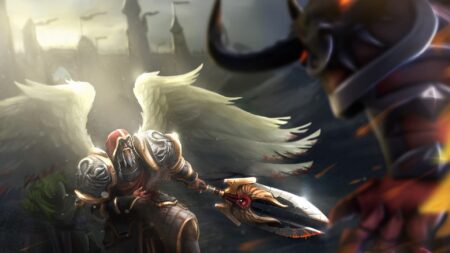 Omniknight was one of the big winners of Dota 2 patch 7.30. The hero had his stats adjusted, which included a buff to Heavenly Grace as it gained more strength, while his ultimate Guardian Angel’s cooldown was reduced.

This resulted in a huge uptick in the hero’s win rate and popularity. Omniknight had the third-highest win rate in high-level MMR games, and was also highly contested in the recent Sapphire OGA Dota PIT Invitational.

Omniknight’s overwhelming strength certainly got the attention of IceFrog’s nerf hammer, but did the hero get nerfed too hard?

In the recent Dota 2 patch 7.30c update, Omniknight received three nerfs and one buff to his toolkit.

The nerf to Guardian Angel is most felt during the early levels. Omniknight doesn’t have the biggest mana pool in the game, so an additional 25 mana cost at the first two levels of the spells is still considered manageable.

The buff to Degen Aura is pointless in most circumstances. Omniknight functions more as a priest than as a knight, and is positioned at the back of team fights. Getting into melee range to decrease enemy movement speed is rarely worth the risk of dying.

Heavenly Grace can now be dispelled by enemies, allowing them to remove all its benefits. It also has twice as much downtime as before with the level 20 talent, making it easier to play around.

Sven was a very popular hero in Dota 2 patch 7.30b. The hero’s ability to farm fast, tank for his team, and deliver incredible damage was highly regarded by the pros. In the recent SAPPHIRE OGA Dota PIT Invitational finals, Sven was picked three times, with a 100% win rate.

Sven and Omniknight have a symbiotic relationship. Sven needs as much strength as possible to increase his damage and tanking abilities, while Omni provides 38 free strength with Heavenly Grace.

With both these heroes being nerfed, it’s no wonder that Omniknight hasn’t been picked even once in the BTS Pro Series Season 8 since the nerf went live. Before the nerf, the hero was one of the most contested heroes in the tournament.

Omniknight is hard to draft around

In competitive Dota 2 patch 7.30c, teams will aim to provide the best matchups for their core heroes as possible. This often means that the supports are picked early in the draft.

Omniknight can no longer be picked early because too many counter heroes have the ability to remove Heavenly Grace. Multiple heroes have dispels to negate it, while others have the option to buy Eul’s Scepter of Divinity as a counter.

This means Omniknight is only worth picking later in the draft, but this forces teams to pick cores like Sven earlier, and risk terrible matchups.

The hero is in a difficult spot both in terms of gameplay and drafts. It will be interesting to see if pros will continue to ignore the hero or find a new way of playing him.