She’s as stubborn as her dad! 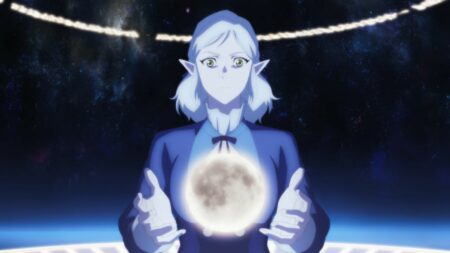 DOTA Dragon’s Blood season 3 develops its own multiverse beyond Mirana and Davion’s heated conflict with Terrorblade.

Book 3 reintroduces Filomena as a new major character in the series. While she’s appeared in the previous seasons as part of Invoker’s flashbacks, the bright-eyed elf finds her own identity as a mage-in-training.

If you’d like to know more about the elf and her ambitions, here’s a detailed introduction to Filomena in DOTA Dragon’s Blood book 3, including her story, personality, and first appearances.

Who is Filomena in Dota Dragon’s Blood?

Filomena is the daughter of the Invoker and Selemene, goddess of the moon. In the original reality, Filomena passes away due to an incurable disease that started when her mother left the family to become divine.

In book 3, Filomena re-enters the story as an adult elf who has a penchant for magic. She discovers that the moon is crumbling and its magical shards are landing on earth. The Althing — the council of Nightsilver Wood — were initially skeptical, but start to believe Filomena when they hear that the moon goddess Mene has been having visions. In this timeline, Selemene chose to stay mortal and passed away.

Upon meeting with Mene, Filomena finds out that her visions were from a past life — the original reality of Fymryn — where she died as a child. As she deciphers Mene’s memories, the elf stumbles upon the Archronicus, a spell book with Invoker’s teachings about the Mad Moon.

She finds the same book in her reality and learns that Invoker has abandoned a previous reality to give her a longer life. Upon confronting Invoker, the father mentions that their world is the 12,403rd iteration of reality that he’s made and that the Mad Moon — which acts as a prison for the Ancients — will always cause chaos.

Filomena feels guilty about the destruction of other worlds, but Mene tells her that she can still undo her father’s wrongdoings by saving her current world from the imminent explosion.

The young mage teams up with Mirana and her troops to find ways to prevent the cataclysmic event, such as making her own moon, but their efforts come up short. To prove a point, Invoker forces the Mad Moon to explode by defeating the Arc Warden, the captor of the Radiant and the Dire.

As Davion buys time by fighting Invoker, Filomena works together with Mene and Mirana to pacify her father. She reveals that she has the incurable disease, showing that her death is inevitable even in this reality.

Knowing all along about her condition, Invoker opens up that he just wanted to have more time with his daughter and joins their side.

Filomena figures out that they can still restore reality with Mirana. As God-Empress of the Sun, Mirana can utilize the Forge — a similar mechanism that Invoker used to create realities — because she has knowledge of previous lives and a divine connection to the Pillars of Creation.

Once Mirana returns to her original reality, it is revealed that Filomena is now part of their world.

Personality and powers of Filomena in Dota Dragon’s Blood

Filomena is a kind-hearted elf who would rather solve problems with rationality than brute force. In her encounter with Terrorblade in Mene’s memories, she willed the goddess’ powers in existence to escape the fight.

The inquisitive elf displayed her mastery of magic on numerous occasions. She has the power to teleport and create barriers and miniature moons. During the activation of the Forge, she assisted in harnessing the power of the Eldwurms.

Filomena first appeared as a child in Invoker’s flashbacks during episode 7 of book 1. As an adult, she first appears in episode 3 of book 3.

All three seasons of DOTA Dragon’s Blood are available on Netflix. The streaming platform has yet to greenlight a fourth season.