23savage has joined BOOM Esports as a stand-in player

He’s the first non-Indonesian to join the team. 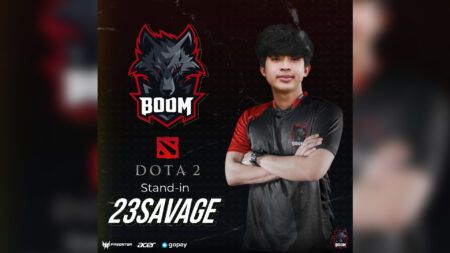 In a tweet, BOOM Esports welcomed 23savage as the squad’s substitute player, noting that it was also the very first time a non-Indonesian had been selected to join its Dota 2 lineup. 23savage will be playing alongside the team until the conclusion of the upper divisions of DPC 2021 Season 1.

Prior to this shift, 23savage was signed under the Vici Gaming banner. He eventually parted ways with the Chinese team on January 3 due to the travel restrictions caused by the COVID-19 pandemic. 23savage wasn’t even able to play a single game with Vici Gaming, and this left the Thai player teamless prior to the start of the DPC 2021 regional league competitions.

23savage is more well-known for his time with Fnatic, when he helped the team win four straight tournaments in a row, including the DOTA Summit 12 — one of the last live events before tournaments switched to an online format due to the global pandemic.

23savage will be replacing Andrew “Drew” Halim as BOOM Esports’ carry player. Drew was signed by BOOM Esports right before the start of the first DPC 2021 season. In an interview with ONE Esports, BOOM’s coach, Aaron “Clairvoyance” Kim, explained how teams sometimes need “a breath of fresh air.”

It seems that BOOM Esports is looking to make another change, now that the team is in fifth place of the DPC SEA upper division standings with a 2-3 match record.

Another important thing to note is that according to Valve’s DPC rule set, teams are allowed to play with a stand-in player as long as four out of the five players are officially registered players before the start of the tournament.

However, if BOOM Esports does qualify for the ONE Esports Dota 2 Singapore Major, and they choose to go with 23savage instead of Drew, they will incur a 40% DPC points penalty at the Major.

READ MORE: Team Secret is the first team to qualify for the ONE Esports Singapore Major