Fnatic earns its first tournament win of the year. 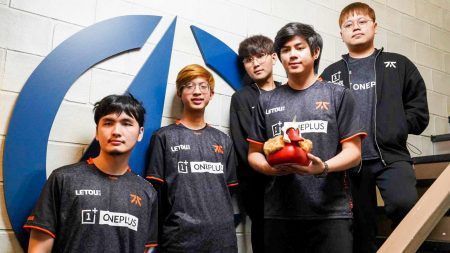 Fnatic’s tournament run proves that the team deserves a spot near the top of the Dota 2 power rankings with impressive showings over the likes of Evil Geniuses and Team Liquid. The team also secured the first place US$60,500 cash prize along with the Beyond the Summit’s newest Duck Trophy.

Fnatic took a commanding early game advantage against OG Seed, and their lead only increased as the game went on. Daryl Koh Pei “iceiceice” Xiang even had 68 bonus Duel damage at the 16-mark of the game.

Fnatic’s Alchemist and Io combo was too much for OG Seed to handle and the European squad were forced to surrender before the game even reached 20 minutes.

Fnatic’s support heroes joined in the action landing an amazing wombo-combo. Iceiceice caught and slowed three OG Seed heroes with his Scatterblast, and Anucha “Jabz” Jirawong followed up with a timely Chain Frost Ultimate. Iceiceice kept the heroes in place with his Firesnap Cookie ability and forced the remaining enemy heroes to retreat.

Fnatic extended their lead with an impressive team fight win. OG Seed had no way to deal with Nuengnara “23savage” Teeramahanon’s Anti-Mage, who finally finished farming and joined in the team fights.

Fnatic took a commanding 2-0 lead over OG Seed after finishing another game that didn’t reach the 30-minute mark.

OG Seed hoped to extend the series with their Earthshaker, Leshrac, and Morphing draft lineup that had strong team fight potential, along with Enchantress who was suppose to be a strong laning phase hero.

Meanwhile, Fnatic decided to go Slark, Void Spirit, and Omniknight, together with playmaking supports like Snapfire and Tiny.

Fnatic shutdown Andreas “Xibbe” Ragnemalm’s Enchantress in the bottom lane by bullying the hero with Slark and Snapfire. But, it was Moon’s Void Spirit who gave Fnatic the slight edge by jumping directly into OG Seed’s backlines and bursting down their support heroes.

Fnatic then regained control of the final game with Void Spirit, Snapfire, and Tiny all using their abilities and ultimates on three OG Seed heroes that were grouped up in the middle lane.

OG Seed’s second-place finish sees walk away with US$35,000 for their efforts.