Neon Esports CEO: “We are all but assured of qualifying for the Singapore Major”

Neon Esports is currently 4-0 in the upper division. 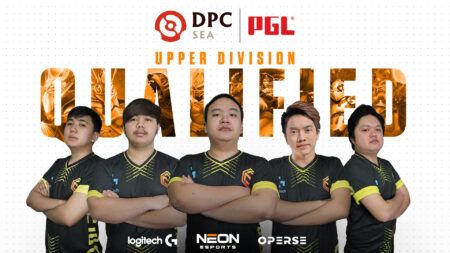 Well, no one saw this coming.

After three weeks of Dota 2 DPC upper division action in the Southeast Asian region, Neon Esports has dominated the standings with a 4-0 match record and 8-3 game record.

Neon Esports’ impressive and surprising match results has also led the organization’s CEO, Robert Campbell, to say that the team is “all but assured of qualifying” for the Singapore Major, which is set to take place from March 27 to April 4, 2021.

While there are still three more weeks left in the first season of the DPC’s regional league, Neon Esports has solidified their position in the standings as the only team that has yet to lose a match. Fnatic, the team right behind them in the standings, currently has a 2-1 match record coupled with a 5-2 game record.

In the Southeast Asian region’s DPC upper division, there are three Major slots up for grabs, which supports Campbell’s case on why he believes Neon Esports is already set to compete in the Singapore Major. The first place finisher of the DPC SEA upper division will go straight to the Major Playoffs, the runner-up team will advance to the Major Group Stage, and the third place finisher will enter the Major Wild Card round-robin competition.

Prior to the start of the DPC 2021 season, Neon Esports made some major changes to their roster, with the addition of former Adroit Esports carry player John “Natsumi-” Vargas. This shift led to Neon’s captain, Andrei “skem” Ong taking over the position 4 support role. The team, likewise, moved Prieme “PlayHard” Maque to the offlane role.

All of Neon’s players have found immediate success in their new roles, which is why they currently have an undefeated record. Neon was best known for crazy meta picks in last year’s online tournament season, and they’ve continued with that trend in the DPC. They often throw their opponents off their games by picking heroes that don’t fit the 7.28b meta, like a Troll Warlord support, for example, against TNC Predator.

Neon Esports is scheduled to play against Vice Esports next, on February 11 at 7:00 p.m. GMT+8. Watch it live on PGL’s official Twitch channel.