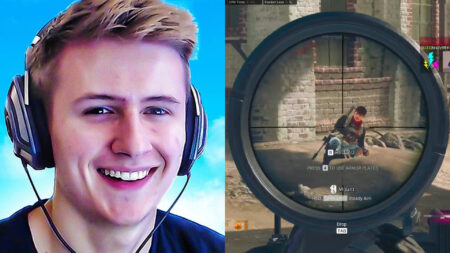 Trying out a new one-shot build on the Swiss K31, the streamer pushed the limits of the sniper rifle by using it in close range combat. With lightning-fast reflexes, Symfuhny weaved in and out of cover and delivered nasty quick scope shots on enemies.

Symfuhny’s quick scope skills with the Swiss K31 are unbeatable in Call of Duty: Warzone

During a recent stream, Symfuhny camped out a building at Karst Salt Mine and managed to take down one member of a four stack.

Despite taking fire, the streamer fought back with the sniper rifle, and landed two consecutive quick scopes to instantly down the advancing duo.

The last man standing revived another player in the building. In the same moment, Symfuhny peeked and landed another quick scope that canceled the revive.

Now down to a 1v1 duel, the streamer broke through the armor of the final member with a point blank shot on the Swiss K31.

To complete the team wipe, the Call of Duty streamer switched to his Bullfrog SMG, rushed into the building, and performed a flashy jump shot on the final operator.