Mark these new spots on your map. Call of Duty: Warzone Season 3 brings soldiers back into the 1980s with the Verdansk ’84 map. While your favorite locations like Stadium and Superstore now have a retro flair to their look, returning players can expect a handful of new explorable places.

Here is every new location to visit in Warzone’s Verdansk ’84 map.

One of the bigger additions to Verdansk, the Grid Radar Array is a towering multi-level structure that can be spotted from any place on the map.

While it may just look like a feat of architecture, you can access the Grid Radar Array with ladders and an ascender. Once you’re at the top, you’ll have a great sightline over Central Verdansk at the risk of leaving yourself exposed on all sides.

Just a jog away from Superstore, Factory enters the scene as a new potential hot drop in the middle of Verdansk. The area replaces the car dealership and water treatment plant with a tarmac maze of buildings, plane parts, and vehicles.

Though the place might not be as secluded, you can find enough cover around the four large warehouses to contest any stray teams from Superstore and Airport.

Previously just a rocky landscape, Northwest Verdansk props up a series of old mine workings, perfect for a quick stop after Summit. With the buildings being fairly close to each other, you can also use this space to engage in close-quarters combat with any trailing teams.

At first glance, the Old Mine may not be considered a top location to loot, but the developers may open up the interior mine complex in a later patch to attract the crowds.

On the opposite side of the map, Verdansk ’84 features a more active and expansive Salt Mine that brings life to its previous identity of Quarry. As smoke puffs out of its numerous factories, you’ll find yourself running through the industrial complex with enough loot for you and your squad.

Don’t get distracted with the salt deposits and red crystalizing pools though. The nearby pine barrens give snipers an easy camping spot over the Salt Mine’s open areas.

While Verdansk is most definitely a warzone, the ’84 map presents a more charming suburban lifestyle with Barakett Promenade’s central park.

In the absence of the library and the market, Barakett Park provides players with an improved flow in movement and combat throughout Southwest Verdansk. Accompanied by trees, a bridged pond, and brick paths, it’s a must for you and your squad to take a quick breather in this open space.

Farmland brings in a Black Ops fan-favorite in the form of the Standoff multiplayer map.

Though it may not be a completely new point of interest, Standoff adds some personality to the countryside location with warehouses, water towers, and a gas station. The cherry on top is the Town Hall, riddled with windows that give you some nice sightlines over the small town. 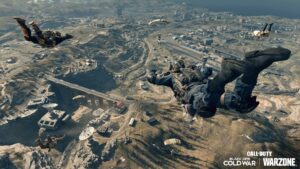 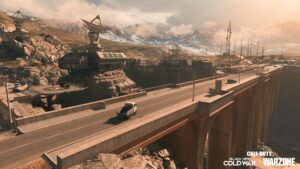 From a concrete dam to the integration of the iconic Summit map, the Gora locale is nothing but extraordinary in its reimagination.

The Gora Summit is a sprawling site with a central island base and three cable car stations. Looking to make ground for a fight or an escape? Gora has two working car cables the will bring back some memories for original Black Ops veterans.

If you’re not a fan of wobbly cable cars, you can also set foot on the Gora Viaduct to cross the river valley in no time. Aside from being the perfect place to do some epic stunts, you can perch yourself on the Viaduct for a solid vantage point of Verdansk.