Buriram coach Mistgunz: ‘We are ready to beat Bacon and All Combo’

The role swap is surely affecting the whole team. 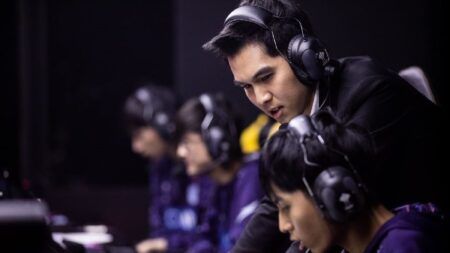 Chakapon “Mistgunz” Pompranee, head coach of Buriram United Esports, recently shared with ONE Esports his insights after their first week at the 2020 Arena of Valor International Championship.

Buriram earned four points after three matches, and are currently ranked third in Group A after losing 0-2 to Hong Kong Attitude in their last match.

“We are still not performing well,” said Mistgunz. “For example, in the match against HKA, the team used a bad champion, only to experience a lot of difficulties later on. We discussed all the ineffective fights we had after that game.”

Mistgunz also answered questions about the role swap they had. He admitted that it has a big impact on the general gameplay.

“I have to accept the risks in the role swap. Each player will be good at different aspects, as well as specializing in different champions. Previously, Sanpett “FirstOne” Marat (F1) was always the main team caller. But if you watch the replays, Parit “Difoxn” Pornrattanapitak has taken over some of F1’s responsibilities, while Chayut “007x” Suebka and Sorawichaya “Isilindilz” Mahavanakul have to support each other.”

For the remainder of the tournament, BRU will go against POPS Bacon Time and the Chinese representative All-Combo. Coach Mistgunz feels ready and very confident before these two series.

“We are not going to underestimate best-of-three games, anything can happen. Teams can use the champion they want and freely develop familiar strategies. For our part, we are ready to beat Bacon and All-Combo.” he confidently claimed.

“Personally, I’m still satisfied with the team’s current situation. We know what we need to fix and look at the problems that come from Group B. Regardless of the round we reach, we have to face strong teams. The best we should do is to play confidently. “