The mission of a manga editor, according to Attack on Titan’s Shintaro Kawakubo When you think of Attack on Titan, author and illustrator Hajime Isayama is usually the first name to pop up, but what if I told you that there was another important person behind the world that Eren Yeager lives in?

His name is Shintaro Kawakubo.

For more than a decade, Kawakubo was the manga editor of Attack on Titan and the right-hand man of Isayama. From character names to story arcs, Kawakubo was there to help dissect the mind of the author and achieve the best outcome for AoT.

During the virtual press conference of the ArtScience Museum’s AoT exhibition, Shintaro Kawakubo spoke to ONE Esports about the highs and lows of manga publication and what the role of a manga editor entails.

The ultimate mission of a manga editor for Shintaro Kawakubo

As an editor, Kawakubo had to work closely with Isayama and act as the bridge between the concept and the final product. On the specific platform of manga, he had to help with both writing and illustration.

“It’s my job to bring out these feelings, meanings, and messages, and assist them along the way so they can put it into words, a drawing, or even a story,” explained the editor.

Aside from the big reveals and cliffhangers, Kawakubo mentioned the job’s emphasis on understanding the author and their own experiences.

As the author takes influence from everyday life and events, the editor finds ways to incorporate such minute memories into a more cohesive scene that fits into the plot.

What made Attack on Titan such a hit? 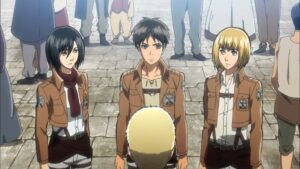 With AoT now being one of the most popular manga franchises in the world, Kawakubo looked back on his earlier days and his first reactions to Isayama’s story.

“Even before the manga started, I was pretty sure that this creation will be a very interesting release in Japan. It wasn’t just confidence about the manga itself, but more of confidence and faith in Isayama as an author,” he said.

Back then, the two were still clocking in the hours to make the story more relatable to their main audience of Japan. Kawakubo even suggested that they give characters like Eren and Reiner more Japanese names so they would be easier to remember.

The editor was initially surprised that AoT became popular overseas, but he can now see how the series can speak to an audience of different ethnicities, genders, and ages.

“I think the reason why it could resonate with readers all around the world is that Isayama’s story has a hidden theme of people without freedom searching for freedom. Maybe it was the key to its popularity,” stated Kawakubo.

The lowest point for the duo in AoT’s publication run

As popular as AoT is now, there were still various struggles along the way for both Kawakubo and Isayama. The manga editor pointed out the release and reception of the manga’s 23rd volume as an example.

The volume introduces the lengthy Marley story arc, where characters like Gabi, Falco, and Reiner take center stage in a completely different location. Since the manga veered away from main character Eren and the people of Paradis Island, many fans cited this to be the moment where they stopped reading.

Despite such negative feedback, Kawakubo and Isayama were headstrong in establishing this new and crucial perspective within the world of AoT.

“Although it might not be pleasing to the readers, Isayama wanted to make sure the theme is being presented. It’s about who is right and wrong, who is on the side of justice. He held onto this belief and just continued on with the journey,” commented the editor.

What inspired him to join the manga industry?

Although Kawakubo is a Hunter x Hunter fan, his main inspiration in joining this line of work was actually the prominent Japanese author Haruki Murakami, known for works like Norwegian Wood and 1Q84.

Through reading Murakami, he learned that stories could have a huge impact on people, as evidenced by Attack on Titan’s popularity.

From inception to the final conclusion, Kawakubo is a shining example of the manga editor, always ready to create a masterpiece together with the manga artist.

If you’d like to see more of the popular anime series, you can buy tickets for the Attack on Titan exhibition at the ArtScience Museum here.