After watching 13 episodes, I got my first tattoo — and it’s from a Chinese anime

What can I say? Love is love. 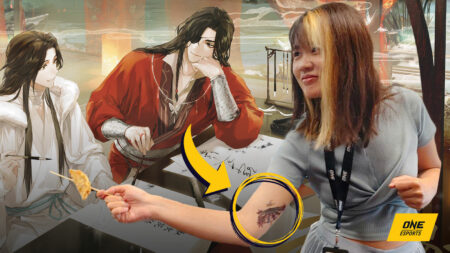 The list of anime, manga, and games that I love is very long, and I’m sure yours is too. Over the years, we attach ourselves to standout characters whom we relate to, whom we pity, whom we admire, whom we sometimes feel very attracted to.

I stumbled upon Heaven Official’s Blessing after Sasaki and Miyano debuted in January 2022. From the same genre, it showed up on my Netflix homepage and I decided to give it a chance. The first few episodes confused me as I didn’t know what was going on, but once the main characters were established, I got hooked.

My love for it didn’t end there. There’s also an ongoing manga and most recently, an audio drama released this month. And of course, the source material “Tian Guan Ci Fu”, an original Chinese web novel by Mo Xiang Tong Xiu which I’m reading now. Besides buying the comic and official merchandise, I’m also in the process of mastering the donghua’s original soundtracks on piano.

So as you can see, my love for Heaven Official’s Blessing runs deep. Literally, for I even got it inked into my skin.

Why I decided to get a Heaven Official’s Blessing tattoo

Our passion for anime and video games can be expressed in various ways. Some create fan art, some cosplay, some post music covers online, while others produce entertaining edits on TikTok.

A tattoo is one such artistic expression, albeit a physically permanent one.

The first time I even considered getting a tattoo was a year ago in 2021. A friend, whom I never thought would get inked, randomly told me one day that she felt YOLO since the COVID-19 pandemic started, and decided to go for it.

Having the idea stuck in my head for a year, I went through the long list of fictional characters I adore, but still couldn’t settle on a tattoo design. Some of my tattooed friends jump on an idea if they still feel a strong desire within a two-week period, while others plan multiple in advance.

I took such a long time–talking about it frequently for months but never taking action–that my inner circle started to turn me into a meme, betting that I’ll only get a tattoo some fifty years later. Not only that, Instagram ads kept pushing tattoo artists to my feed every single day.

Then, earlier this year, I consumed Heaven Official’s Blessing in its various forms and could not stop. This particular story changed my life (and eventually my body), in a quiet way on a late night in my darkened room at 1 a.m.

It was a short scene that bore a simple conversation. San Lang went down to the Sinners’ Pit to eliminate every single undead soldier imprisoned within. Xie Lian jumped down after, and was caught by Hua Cheng midfall, who had dropped his disguise.

After they quelled general Kemo’s anger, Xie Lian shared a quiet moment with San Lang, and reprimanded him, “When you see a pit like this again, think twice before you jump. I couldn’t even stop you. I didn’t know what to do.”

Despite the fact that this was the first time Hua Cheng appeared as himself, the “Crimson Rain Sought Flower”, one of the most powerful and feared ghosts in the realms, the enemy of the heavens, Xie Lian did not mention anything about his true identity. He completely respected Hua Cheng and his choices. If he didn’t want to reveal or talk about this part about himself, Xie Lian would continue to uphold his decision, which surprised even Hua Cheng.

After a moment of silence, Hua Cheng probed, “Don’t you have anything else to ask?”

“What else do you want me to ask?” Xie Lian replied.

When Hua Cheng pushed the topic further, Xie Lian matter-of-factly stated that whether he was human or not was completely irrelevant.

This conversation is etched into my heart. It isn’t romantic, it isn’t filled with idioms (cheng yu) or poetic sayings (yan yu), it wasn’t animated with beautiful backgrounds. There wasn’t even an OST playing. It was just a few lines of conversation slotted in between action scenes, but they carry so much weight, not only about the protagonist and the deuteragonist, but also about the relationships in our life and how we approach them.

The first time San Lang met Xie Lian on the pull cart amidst in episode five shares the same resonance. Xie Lian was so unassuming even though a stranger had suddenly appeared next to him, intruding on his self-talk. Though surprised, Xie Lian listened to what he had to say, and agreed with his point of view, humbly continuing the conversation, never once imposing judgement on others.

The process of getting inked: how I went about getting a Heaven Official’s Blessing tattoo

Since the people around me knew my intention, they also kindly introduced their trusted artists. My colleague went out of her way to send me three handles on Instagram — her friends who were also talented tattoo artists.

Everyone expected me to get a Genshin Impact tattoo as my first. After all, I’ve spent a lot of money on it, rave about it on social media, and play it every single day without missing a daily commission. But since I’m still having trouble conceptualizing a design, I ended up getting a Heaven Official’s Blessing tattoo as my first.

I also had some self-imposed requirements: no words, no portraits, and not on surfaces that faced outwards.

I saved screenshots of various objects from Heaven Official’s Blessing before deciding that I wanted the red umbrella as the centerpiece. Due to the symbolism behind Hua Cheng’s butterfly and maple leaves, which commemorate their first open meeting on the pull cart, I chose them as secondary elements.

Even though I’m an artist myself, I could not conceptualize them in a tattoo. That’s where Chloe came in, my colleague’s friend.

After browsing many profiles on Instagram, her work stood out because she draws objects, some literal, some conceptual, some metaphorical. I had a really good feeling about her, and simply entrusted her with my intention a hundred percent.

The night before our appointment, she sent me her design based off the references I provided, and I was so happy and excited that I had trouble falling asleep. “It’s so pretty!” I said repeatedly.

Though the umbrella in Heaven Official’s Blessing is red, I preferred it to be largely black, as red has a notorious reputation for fading faster than other colors.

This is my very first tattoo, and strangely, I only felt slightly nervous the night before. On the day itself, I was calm, and never had any doubts because I knew that what Chloe had created is exactly what I want. After she placed the outline on my arm, we started the inking process.

I originally wanted something small that was 5cm in size, but as you can see, due to the detailing involved, we agreed on a larger 8cm piece.

I’ve heard so much about how much pain one would feel, but because I had no prior experience, and the fact that everyone feels pain differently, it didn’t hurt as much as I thought it would despite the fact that the inner bicep tends to be more sensitive. It hurt enough that I couldn’t fall asleep, so I spent that time reading Solo Leveling, a popular Korean webcomic that’s being adopted into an anime.

The overall tattooing process was a lot simpler than the 12 months I spent agonizing about my first tattoo. I did not move my right arm at all in the three-hour timeframe, and only ever felt slightly numb.

Chloe did the blacks, then the reds, then the white highlights. The pain wasn’t so much from the needle, but more of the fact that in the last hour, the same area of skin, specifically where the foreground maple leaf meets the umbrella, kept getting punctuated over and over again due to the detailing and shading required.

My inner bicep felt so sore, and for a few days after. I’ve been taking care of the tattooed area meticulously, putting ointment daily after showering and wearing short sleeve shirts that don’t rub against it.

Most importantly, I wake up and feel happy every day seeing art on my body. I’ve certainly been blessed by the heavens with something so unique and meaningful.

READ MORE: Kaguya-sama: Love is War is getting a canon anime movie for one of the manga’s best arcs