Get ready to level up. Daggers up, hunters! The hit manhwa Solo Leveling is finally getting an anime adaptation.

Unlike the destined power fantasies of Goku and Naruto, Solo Leveling tells the story of a lowly hunter named Jin-woo who accidentally finds a new source of power during a failed dungeon run.

Here’s everything you need to know about the Solo Leveling anime, including its story, VA cast, release date, and status of the manhwa.

What is Solo Leveling all about? 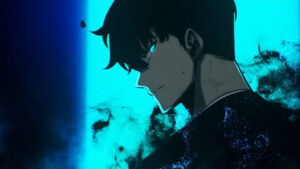 Solo Leveling is a Korean web novel series written by Chu-gong and illustrated by Jang “Dubu” Sang-rak of Redice Studio. The story takes place in present-day Korea with MMORPG elements.

Humans who possess magical powers can take on the job of a hunter, a person who enters gates to another dimension to slay monsters and bosses. If the hunting party clears out the gate’s dungeon, their rewards can be used as money in the real world.

The main character, Sung Jin-woo, is known as the world’s weakest hunter. Despite such a reputation, he continues to participate in dungeon raids as a way to pay for his mother’s hospital bills.

During a double-dungeon run, Jin-woo sacrifices himself to allow the rest of his party to escape. On the verge of dying, the hunter accidentally completes a hidden quest and becomes a “player”, a special role that allows him to complete quests and level up by himself through a game-like system.

Status of the manhwa

The Solo Leveling manhwa published its final chapter on December 29, 2021, closing out the series with a total of 179 chapters.

A-1 Pictures, known for its animation work in Sword Art Online and Erased, will be producing the anime with Shunsuke Nakashige as the director and Noboru Kimura as the head writer. Tomoko Sudo will be the head of character design.

The anime’s music will be composed by Hiroyuki Sawano, who’s also worked on other popular anime titles like Attack on Titan, Blue Exorcist, and Kill la Kill.

The anime will likely adapt the Japanese translation of the manhwa, which changes a few details of the story. For example, Jin-woo is now Shun Mizushino, and the setting changes from Seoul to Tokyo.

A-1 Pictures has yet to announce the VA cast of Solo Leveling.

The Solo Leveling anime is slated for a 2023 release.

READ MORE: The Solo Leveling manhwa is an essential must-read for true gamers