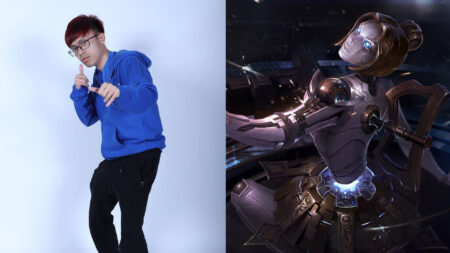 Poon “Ozora Veki” Kok Sing is back on the Rift! From competing in League of Legends with the Kuala Lumpur Hunters, to Mobile Legends: Bang Bang with Geek Fam in MPL MY/SG, the talented esports pro is now leading the charge in Geek Fam’s Wild Rift division.

The squad recently won the Wild Rift SEA Icon Series Malaysia in an incredible reverse sweep, and are hungry for more.

Geek Fam’s resident mid laner shares his pro tips and tricks for one of his best mage champions, Orianna:

On Orianna, I choose Conqueror as my keystone as this is the best DPS rune for her. For secondary runes, I take Brutal, Regeneration, and Manaflow Band.

These runes are currently the best set, as it outputs the most damage and gives you the most mana sustain. I rarely change the runes, but if you really want, you can take Sweet Tooth for a stronger laning phase.

For Summoner Spells, Flash and Barrier is the best on Orianna as she is an immobile champion. These two spells give her the best chance to survive.

After the Liandry’s nerf in patch 2.1a, getting Luden’s Echo as your first item will give you the most damage. Not to mention Seraph’s Embrace, which will give you more sustainability because of the shield and mana. Both of these items work, and it really depends on how you want to play the game.

For your second item, buy Infinity Orb if enemies are generally squishy so that you can burst them harder. If there are a lot of tanky heroes in the enemy line up that requires you to DPS them down, Liandry’s is better suited as a second item.

For your third item, always go for Rabbadon’s Deathcap as it will give you sufficient AP to burst down the enemy. For your fourth item, go for Inifinity Orb or Liandry’s if you haven’t bought either of them yet. For your last item, it is flexible. If the enemy has a lot of healing, buy Morellonomicon.

Against ranged heroes, increase your skill points in this order: 1, 2, and 3. This is good for poking. Against melee heroes like Fizz and Yasuo, put a point in 1, 3, then 2 within the first three levels. This let’s you bully them harder in lane as they are forced to walk in to trade when your shield is up.

When it comes to combos, use your first and second ability together to poke, and your third ability if the enemy is standing back from the ball.

1-3 -2 — use this combo to initiate team fights. Chain your third and second ability to help your jungle when invading, or during a Scuttle fight. Combo your third ability and ultimate, Command: Shockwave, if you you have a front line like Alistar or Rakan to engage in team fights.

Know your role in the early, mid, and late game

In the early game, you should look to poke out the enemy champion and try to use your first ability, Command: Attack, on them instead of using it on minions.

Auto attack the enemy champion, especially if the champion cannot trade back. At level 2 you can start using the 1-2 combo, which pokes the enemy even more, and is really hard to dodge. Dominate the laning phase with small HP trades, and secure mid priority.

In the mid game, you should position yourself safely, as Orianna has no way to escape other than with Flash. Follow up with your teammates’ engage or Flash in yourself to engage with a 1-3-2 combo. After that, stay safe and DPS for your team.

In the late game, when you have three items and more, your poke becomes really unbearable for the enemy. Keep poking the enemy to force them away from the objectives. If they are brave enough to come for you, position yourself in such a way that you can Command: Shockwave their backline, or one shot their front line.

Remember, Orianna’s only weakness is lack of mobility, so you have to always position yourself well. When Flash is up, you have an opportunity to flash engage onto the enemy backline with Zhonya’s Hourglass.

The best champions to combo with Orianna those that have AoE crowd control like Wukong and Alistar. You also work well with single-target catchers like Camille and Vi.

Beware however, of heroes that can jump onto Orianna. They are easily the biggest threat, such as assassins like Zed, Yasuo, and Camille. Buying Zhonya’s Hourglass early can help you with this issue.

During the laning phase, I would say that the hardest champion to fight is Ziggs, especially after the buffs to this champion on patch 2.1b. You have to be very good with your positioning, and sidestep his bombs so that you don’t take too much damage from his poke.

Overall, Orianna is one of the few mage champions who can easily get mid priority, so always try to help your jungle after pressuring the enemy mid lane. Roaming and wave control are keys to your success.