“Not banning Kaja in game four of the MPL final backfired badly.” 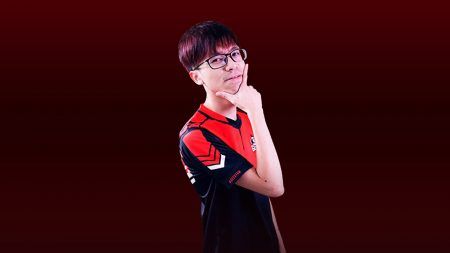 Poon “Ozora Veki” Kok Sing is Malaysian team Geek Fam’s offlaner, shotcaller and mentor, and a pivotal reason why Geek Fam placed second in this season’s MPL MY/SG, up from 5th/6th the season before.

While Geek Fam does not officially have a coach, the veteran MOBA pro has effectively been filling the role ever since he joined the team last season – which also marked his first foray into professional MLBB.

As the saying goes, all good things take time, and for Ozora Veki, it took a while to get to a level where he could both play and coach the team effectively. Fresh out of the amateur scene last season, he needed a while to adjust to the MLBB pro player life.

“It got better over time because the more time I spent with the team, the more they respect my opinions and listen to me so it’s pretty easy to teach them,” Ozora Veki told ONE Esports.

A team with solid individual players, he stepped up to fill the gaps in strategical play by reconstructing how the team approached the game. A former professional League of Legends player who won Hyperplay 2018 with the Kuala Lumpur Hunters, Veki helped to strengthen Geek Fam’s game review processes, analysis on opposing teams, and daily self-improvement.

Previously an AD carry, he now specializes in offlane. Knowing that he was joining a team that already had their carry roles filled, Veki was prepared to sacrifice his main role to meet the team’s needs as long as it meant improvement for the whole squad.

Fortunately, thanks to his years of MOBA experience, Veki has no problem learning new heroes at a very fast pace.

“Playing LoL before, I understand a lot of concepts that pure mobile MOBA players don’t. They don’t understand what is lane priority, how this lane match up can allow you to rotate first, what can you do with pressure, the importance of clearing your jungle faster than the enemy, rotations, resources, they don’t really know.”

Demonstrating mastery of these concepts, Veki’s approach to MLBB is different from other offlaners, and is reflected in his unique play style.

Taking non-meta battle spell Arrival in game two of the final, he caught Resurgence completely off guard in between two turrets on Terizla.

A very powerful hero in the early and mid game, Veki used Terizla’s spells to clear waves quickly to achieve lane priority, then looked for opportunities to teleport to other lanes.

This is a core reason why he believes Resurgence is a strong team that can consistently out-rotate their opponents. Lim “ly4ly4ly4” Yang and Jason “Jason” Koh Wei Hao after all, were also former LoL pro players, and Veki has a lot of respect for them after losing the final.

“Kudos to Resurgence for performing so well despite not being physically together. They played very well and were well-prepared to draft against us. I can’t believe ly4ly4ly4 can be serious while half relaxing on the bed!” said Veki.

Due to their large hero pool and flexibility, Geek Fam have more options in drafts, which gives them an edge over opponents. Finding themselves trailing 1-2 in the MPL MY/SG final against Resurgence, game four was do-or-die.

Taking a risk, Veki decided not to ban Kaja and picked Selena, which “backfired badly” because “the hero is just really broken right now”. Believing that game four would have been much closer if picks and bans took a different turn, he felt that Geek Fam underperformed so drastically that it looked as if another team was playing in place of them.

Besides drafting, there were also times in the final where fellow shotcaller Xorn was seen engaging too far forward for the team to catch up. As a result, Geek Fam got caught out of position and lost members.

“Sometimes it might not be a good engage, but due to how much trust our players put in him, we just follow up anyway,” said Veki.

While Veki shotcalls macro objectives, Xorn breaks down the steps the team needs to do in order to achieve the bigger picture. Together with Rumpel, they had put in a lot of time and effort planning drafts for the playoffs.

For now, Veki is content that Geek Fam has proved they are the best MLBB team in Malaysia. Despite criticisms last season, he’s grateful that fans are able to see his hard work behind-the-scenes come to fruition.

“I feel like I have been appreciated, and that’s all I wanted. People now know I’ve been doing so much for the team. It makes me feel better, much better.”