Seraphine carried the team to victory! 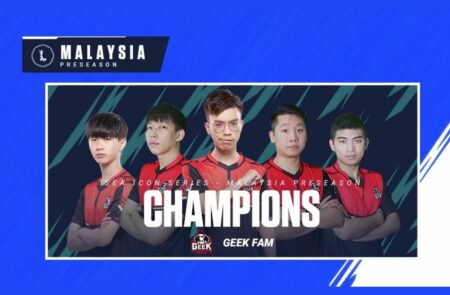 Malaysia is the second region in the Wild Rift SEA Icon Series to crown their champions. After a hard-fought series against Berjaya Dragons, Geek Fam won the best of 5 finals with a 3-2 score.

The start of the series was a struggle for Geek Fam, with Berjaya Dragons in top form in the first game. Even with excellent knock-ups from GF Nyx’s Alistair, the combined damage from BJD Kagame on Corki and BJD Sagi on Ezrael were too much for Geek Fam. Unable to keep up with the team synergy of the Dragons, Geek Fam lost the game and the Dragons took the first point.

The momentum of the Berjaya Dragons carried over to Game 2. Early game ganks from the Dragons gave the team an advantage from the start and established map control. Even with the AoE damage coming from GF OzoraVeki’s Kennen, Geek Fam could not break Berjaya Dragons, and the Dragons took Game 2.

With the Dragons just one point away from taking the series, Geek Fam knew they had to play a smarter game in Game 3. GF Momo’s Miss Fortune used Bullet Time to push back Berjaya Dragons and give space for Geek Fam to take objectives. With the barriers from GF Nyx’s Lux in the later game sustaining the team through whatever the Dragons would try on them, Geek Fam was able to take Game 3.

With their spirit renewed, Geek Fam struck back in Game 4. Winning a couple of clashes in the early game got the ball rolling for Geek Fam, proceeding to win every team fight in this game. GF OzoraVeki on Yasuo and GF Momo’s Xayah gave lightning-quick attacks to the Dragons with GF Nyx’s Lux supporting the team once again, leading Geek Fam to take the game.

Berjaya Dragons began playing more carefully in Game 5, knowing that it was their last chance for the series. The early game seemed to favor the Dragons, but Geek Fam was able to exploit mistakes in their opponents’ attacks. With GF Nyx trading out Lux for Seraphine, Geek Fam capitalized on their crowd control and pulled off a reverse sweep to win the series and the title of SEA Icon Series Champions for Malaysia.

READ MORE: This is the full schedule for the Wild Rift SEA Icon Series Summer Season