Nothing but respect between the top SEA teams. 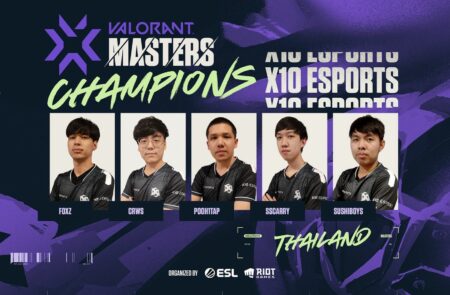 Thai team X10 successfully cleared the first stage of Valorant Masters by winning every one of their matches in the playoffs. In the final, they defeated Team SMG 3-2 in a close best of five series.

Ironically, both teams won on the maps that their opponents picked, and conversely lost on their preferred maps. Team SMG took Icebox, while X10 took Bind.

“Pooh1Tap is my rival,” says Team SMG in-game leader Sha “ZesBeeW” Mohtar told ONE Esports. “The way he plays is exactly opposite the way I play, like the way he picks angles very aggressively.”

He also acknowledged that X10 overall challenged him as an in-game leader. “Against all other SEA teams, I can still be confident,” he said. “But X10 makes me want to think more. I have room to really improve because of these players.”

Everything went right for Team SMG on the third map on Split, but on Ascent, X10 started to show up big. With X10 Pooh1Tap consistently controlling mid aggressively, Team SMG began to break.

They struggled on the offense on the final map, Haven, which gave X10 the the momentum to take the series.

Team SMG went through quite the roller coaster of emotions during their Challengers to Masters journey. They first lost the Masters slot to Timing Monster Gaming after a 3-1 defeat, and were suddenly called back to the competition after TMG’s star player was caught cheating. SMG’s Joshua “JdFaker” Fok says that the lack of time to prepare may have affected how they played.

“The Challengers defeat threw us off a bit,” said JdFaker. “We didn’t even practice for the first two days. Who knows what would have happened if we practiced those first two days? It might have made a difference. But then again, our opponents were also prepared.”

X10, in turn, acknowledged that Team SMG are the hardest opponents they’ve had to face so far. As for the rest of their Valorant Champions Tour journey, they’re determined to keep improving as they’re now one step closer to challenging bigger teams from the West.

“The most important factor in today’s victory is the resilience we have as a team,” said X10’s shotcaller Thanamethk “Crws” Mahatthananuyut. “But what we want to focus on next is communication and the team’s movements. That’s the key factor in our gameplay. We just want to play better than we have before.”