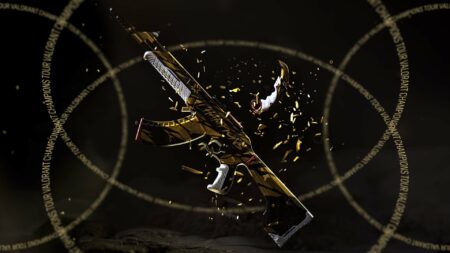 Fans can also earn free in-game items including the VCT spray and gun buddy when they watch the Valorant Champions 2021 tournament through various streaming platforms.

What is included in the Valorant Champions 2021 skin bundle?

Weapon skins in the bundle include the Champions Vandal and the Karambit knife. Both feature the Valorant Champions 2021 black, gold, and red color themes.

What makes them unique is the Champions Aura design. A glowing outline appears on the Vandal and Karambit knife if you are the top fragger in the match. The Vandal’s Champions text on its side also lights up after each kill.

The Vandal is tied to the Valorant Champions anthem, which plays the instrumental version of ‘Die for You’ by Grabbitz when you press the inspect command.

The Vandal also has a unique finisher that turns the map into a scene from the anthem’s animated video with a giant Brinstome appearing above the map.

Players can witness this by walking into the giant orb with the Valorant Champions logo where the finisher takes place.

Half of the revenue from the Valorant Champions 2021 skin bundle will be split equally between all the teams that qualified for Riot Games’ Valorant 2021 world championship.

To unlock the free VCT spray and gun buddy, fans must link their Valorant accounts to Twitch, YouTube, Afreeca.TV, or Trovo and watch the matches during the Champions broadcast, or approved watch parties by Riot Games.

All Valorant players will also receive a free Valorant Champions player card that was released on November 24, 2021.

Valorant Champions 2021 features 16 of the best teams in the world competing in the game’s first-ever world championship. The group stage begins on December 1, 2021.

READ MORE: How to get a free Arcane Jinx player card in Valorant