NRG completes its new Valorant roster with Infinite and Shanks

NRG has added more firepower to its Valorant roster 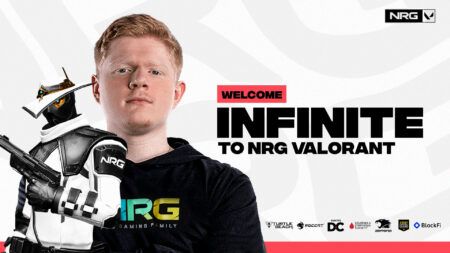 Infinite is a former CS:GO pro who has been part of multiple teams since he started his career in 2017. He was also part of the Chaos Esports Club roster that finished first place during WESG 2019 North America, along with a fifth/sixth-place finish in Flashpoint Season 1 playing under Orgless.

Meanwhile, Shanks is a young up-and-coming Valorant player who has made a name for himself in Valorant’s competitive queue, where he frequently plays against other pro players.

Infinite and Shanks will be replacing Lioc “effys” Sauvageau and Yannick “Koler” Blanchette.

NRG failed to qualify for Riot’s main First Strike tournament after the team lost to Complexity in the Nerd Street Gamers qualifier. They then lost again to FaZe Clan in the second UMG qualifier. NRG then decided to part ways with effys after his trial period finished. The team then decided to bench Koler.

Expectations for NRG going into the Riot’s new Champions Tour pro circuit remain high, but with top-rated teams like 100 Thieves, Sentinels, and TSM all playing in the same NA region, NRG will have their work cut out for them.