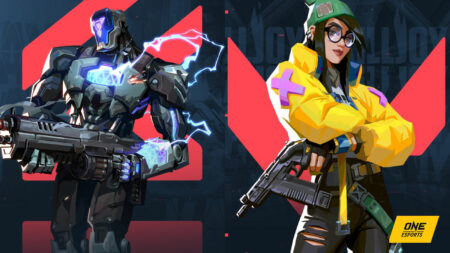 Valorant patch 5.01 introduced buffs to Phoenix, Yoru, and KAY/O, but the robotic initiator was probably one of the biggest winners from the patch.

The line of sight requirement has been removed from his FRAG/ment grenade, which means it can now deal damage through walls.

In fact, the molly is now an effective counter to Killjoy’s Lockdown ultimate — it can destroy it through walls, similar to Breach’s Aftershock bursts.

One player who goes by the handle @careeerTwitch on Twitter, showed how this would work on Ascent. FRAG/ment destroys Lockdown in all the most common spots on the map, including at A Main, A Garden, and B Main.

It does this from the other side of the wall, an incredibly simple counter that works without KAY/O having to ever put himself in danger. This means an ability that costs just 200 credits can nullify a seven-point ultimate in just a few seconds.

If your entire push is riding on Lockdown, you’ll want to have a backup plan ready, especially if you’re going up against a KAY/O.

Valorant game designer Ryan “Rycoux” Cousart responded on Twitter, confirming that this interaction was not in fact a bug and was implemented deliberately.

“I know these look a bit weird but are definitely intended by the new design,” he said. “These are the kinds of tradeoffs we work through on the balance side.”

“We took the bet because we liked the reliability of the zone for the base case but if this becomes too egregious we will find a fix.”

While some players have argued that you can place the Lockdown slightly farther back to avoid the grenade, that also runs the risk of the ultimate not covering the site properly and forcing enemies out as intended.

Other than the FRAG/ment grenade, Lockdown is also vulnerable to several other abilities in the game, such as Breach’s Aftershock, Sova’s Hunter’s Fury and Shock Bolts, and Raze’s Paint Shells grenades.

READ MORE: TenZ is all aboard the Shroud hype train: ‘He’s going to perform really well’