G2 Esports may be making major changes to its Valorant roster

The team could be looking for a new in-game leader. 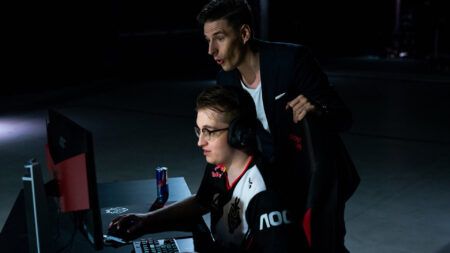 G2 Esports were once considered the most untouchable Valorant team after dominating the European region for the most of the year and winning all seven Ignition Series championships in convincing fashion.

But after the team was shockingly knocked out of Riot’s First Strike EU tournament by Team Heretics in the semifinals, G2 is now looking to rework its squad. Reports have since surfaced that David “DavidP” Prins has been removed from G2’s Valorant roster, and Jacob “pyth” Mourujärvi may be on the trading block.

According to 1pv’s French CS:GO and Valorant reporter neL, G2 is looking for a player who can take over the in-game leader role for the team. Óscar “mixwell” Cañellas Colocho has been the team captain since the squad was formed, but G2 has never had an IGL, instead trusting all members to make calls, depending on what they see fit.

Not having an IGL is uncommon in the competitive FPS scene, such as for CS:GO and Valorant, since a designated shot-caller generally means that the team is able to play more cohesively as a unit.

For G2’s loss to Team Heretics in the semifinals, DavidP recorded 10/16/10 and 14/18/11 KDA records on Haven and Split respectively, as his team’s primary Sage main. Both games were close matches with G2 losing 13-10 on Haven, and then being eliminated from First Strike Europe altogether with a 13-11 loss on Split.

There is still no official word from G2 Esports regarding DavidP’s exit from the team. But if the report is to be believed, the team will be looking for a big name replacement to lead the seven-time Ignition Series championship squad.

READ MORE: Snowball fights are coming to Valorant in patch 1.14