Samurai becomes the fourth US player to qualify. 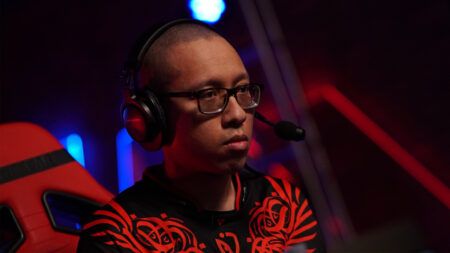 What’s even more impressive is that Samurai was able to run the whole tournament gauntlet back after he lost to Alan “Nephew” Sun in the grand final of the first NA West 1 online qualifier.

Samurai would not be denied a spot in Capcom’s most prestigious Street Fighter V: Champion Edition tournament though, after running through the competition and making it all the way to the grand final on the winners’ side.

The final set of the tournament was also a rematch between Samurai and Alex who also faced one another in the winners’ final, which Samurai won 3-1.

At the start of the grand final match, Alex’s strategy of keeping Samurai grounded worked perfectly. After landing multiple anti-air hits on Samurai’s Akuma, Alex was able to get different attack options that snowballed into a reverse 3-1 match win that reset the bracket.

After the reset, Samurai decided to go for a calculated approach by landing counter hits and contesting Alex’s overly aggressive attacks on wake-up.

Alex would fight back by getting ambiguous cross-ups with his impressive movement using Chun-Li. This approach also earned him a perfect round win, which stopped Samurai’s momentum after taking a 2-0 lead.

Samurai would eventually punch his ticket to Capcom Cup 2020 after changing his strategy mid-match. He went back to using continuous aerial attacks that caught Alex by surprise.

After winning the first match and keeping Samurai grounded, Alex didn’t expect the sudden shift in strategy. And this earned Samurai the final qualifier slot at Capcom Cup 2020.

The CPT NA West 2 win gives Samurai an opportunity to go up against the best players from around the world in the upcoming Capcom Cup 2020 tournament.

With all Capcom Cup qualifiers now complete, the 20th spot of the tournament has now been left up to the fans, where they can choose the final contender via a community vote.