The rosters are now locked. 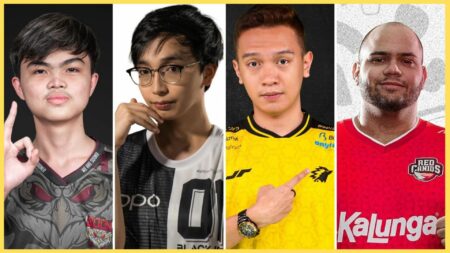 The most-awaited M3 World Championship will be starting soon.

Moonton has released the official roster of the 16 participating teams in the tournament.

These teams will battle it out for the lion’s share of US$800,000 prize pool and the right to be called the best Mobile Legends: Bang Bang team in the world.

SeeYouSoon is Cambodia’s only representative at the M3 World Championship. Known for their explosive plays, SeeYouSoon is undeniably a dark horse going into the tournament.

Red Canids surprised many when they defeated powerhouse Keyd Stars at the inaugural MPL Brazil Season 1. Now, they are off to test their limit as they face off other regions.

Despite losing against Red Canids at MPL Brazil Season 1, Keyd Stars is still a big threat in the scene.

Some of their members, such as Mayke, Luiiz, and Cabral, were Brazil’s representatives last M2 World Championship previously with DreamMax E-Sports, a testament on how dominant they are in the Brazilian MLBB scene.

EVOS SG has been a constant sight in the international scene, appearing at every MLBB world championship since M1.

With a refreshed roster going into the M3 World Championship, it’s exciting to see just how they’ll fare this time against some up-and-coming teams in their group such as BloodThirstyKing (BTK) and SeeYouSoon.

RSG SG is a team that we all know and love. Veteran Mobile Legends players such as ly4ly4ly4 and Jason are still competing under the RSG banner, and still continue to surprise many with their fast, yet calculated plays.

Before acquiring ONIC Esports’ SaSa and RRQ Hoshi head coach Jamesss, Team SMG struggled to reach the playoffs and was always at the bottom of the standings.

Now, they are the strongest team in Malaysia, sweeping fan favorite Todak in the grand final of MPL MY Season 8. Will they continue their winning ways at the M3 World Championship, or will JJ Lin’s Mobile Legends team crumble at the hands of international teams?

Todak is arguably the most popular MLBB pro team in Malaysia. They previously won MPL MY Season 6 with a perfect record.

They may have slowed down in recent seasons, but there’s no denying that the team still has a strong foundation and mindset to win it all this time around.

GX Squad is the latest team to qualify for the M3 World Championship through the M3 Arabia Major.

If there’s one advantage they have coming into the tournament, it’s the fact that not much is known about how they play and what’s their current meta.

BTK (BloodThirstyKing) is led by popular streamer MobaZane. The team has been pounding the North American scene this year, winning all community tournaments, and eventually the M3 North American Qualifier.

The team has been around for years, and their chemistry in the Land of Dawn is unmatched.

Malvinas Gaming took the Latam Championship 2021 throne and will represent the region at the upcoming M3 World Championship.

Placed in Group A, they’ll be facing some of the toughest teams in the tournament such as MPL PH’s powerhouse Blacklist International and MPL BR’S Red Canids. It’s a difficult task, but Malvinas Gaming has what it takes to surprise.

Navi’s members such as Sawo, Sunset, and Lil are no stranger to the world championship, having competed in all iterations since M1. Their aggressive playstyle are sure to astound viewers when the group stage begin.

Much like Middle East’s GX Squad, Bedel is a newcomer to the international MLBB scene. They dominated in Mobile Legends Turkey Championship 221 to earn their spot at the M3 World Championship.

The back-to-back champions of MPL PH is one of the favorites to win it all. Despite losing to ONIC Esports in the ONE Esports’ MPL Invitational 2021 (MPLI 2021) grand final, Blacklist International are reliable in-game, playing with a lot of discipline and cohesiveness.

ONIC PH underwent a massive roster adjustment going into MPL PH Season 8. Perhaps one of the biggest is the return of Baloyskie to ONIC PH after playing with Aura PH for two seasons.

The risk was worth it, as they were able to breeze through the upper bracket, but ultimately lost to Blacklist International from the lower bracket.

Still, ONIC PH is a force to be reckoned with, and will definitely make headlines once the group stage begins.

ONIC Esports are on a roll right now after winning MPL ID Season 8 and ONE Esports’ MPLI 2021. The team went through a rough patch in previous seasons, but managed to put all the pieces together this year since Butsss joined in MPL ID Season 7.

Now, ONIC Esports is set to claim the grand slam by trying to win the trophy at the M3 World Championship as well.

Despite losing the MPL ID Season 8 grand final to ONIC Esports, and Blacklist International at ONE Esports’ MPLI 2021, RRQ Hoshi is still a juggernaut in the Mobile Legends competitive scene.

Now, the King of Kings will once again test their might again as they face off the best of the best at the M3 World Championship.