Down 5,000 gold, Wei single-handedly saves Royal Never Give Up in their base

All hail the master of the Ruined King. 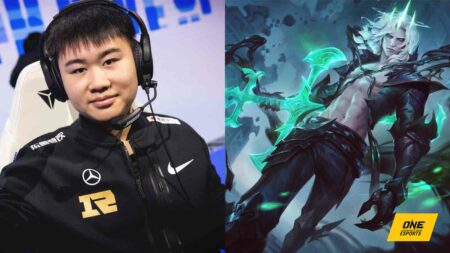 On Day 4 of the Rumble Stage, Royal Never Give Up found themselves on the backfoot against Saigon Buffalo Esports, trailing in gold, experience, kills, and objectives.

But one man, RNG jungler Yan “Wei” Yang-Wei, stepped up on his most-played champion this season and single-handedly carried his team to victory.

Against the VCS representatives, who have yet to find a single win in the Rumble Stage, the LPL Spring 2022 champions were pushed to their limit in this best-of-one. Nothing was going their way from mid to late game as each member got caught out of position across the map.

However, Wei managed to salvage the last two team fights with clutch mechanics on Viego, keeping his team in the game and eventually closing out the 35-minute affair.

Royal Never Give Up breezed through the Group Stage with a perfect 6-0 match score. After Riot Games discovered a technical latency issue, they even replayed three of their games, and still defeated everyone in Group B.

So far in the Rumble Stage, they’ve only lost once to G2 Esports on Day 1. This match against Saigon Buffalo was the closest they’ve been to losing again, but as their team name would have it, they truly did not give up till the very end.

After securing Baron 29-minutes in, SGB grouped up as a five-man unit in the top lane. With double the kills and a solid 3,000 gold lead, they aggressively dived RNG in between two towers. Making swift work of Chen “Bin” Ze-Bin’s Gwen, Chen “GALA” Wei’s Tristana, and Shi “Ming” Sen-Ming’s Leona, Saigon Buffalo were in an advantageous 4v2.

Extending the gold lead to 5,000, they looked poised to close out the game with Baron buff.

In this crucial moment, Trần “BeanJ” Văn Chính’s Lee Sin bit off more than he could chew. Looking for a kill onto Li “Xiaohu” Yuan-Hao’s Vex under two Nexus towers, he was stalled by Stopwatch.

Even though he managed to get out safely, Wei saw the opportunity and took it. Closing the distance with Heartbreaker, he got the kill, a 700 gold bounty, and the body possession.

As Lee Sin, he eliminated Đinh “Taki” Anh Tài’s Nautilus for a double kill, which forced the two remaining members of Saigon Buffalo to retreat.

After single-handedly saving Royal Never Give Up from the brink of death, Wei’s job was not finished. At the 34th minute, both Baron and Elder Dragon were alive. Since they had Cloud Soul, RNG prioritized Elder Dragon, cleared vision all around the pit, and positioned themselves favorably.

Jumping onto BeanJ’s isolated Lee Sin, they traded him for Ming’s Leona. Once the first body dropped, that’s when Wei came alive. Again on Lee Sin, he picked off target after target. RNG were fortunate enough to only lose two in exchange for the ace and the game.

With a match score of 0-7, Saigon Buffalo Esports has been effectively eliminated from the tournament while Royal Never Give Up climbs to first in the standings.

The Rumble Stage will conclude tomorrow, May 24. Catch all MSI 2022 matches live on Riot Games’ official channels on Twitch and YouTube.