Tyler1: ‘The Korean server experience is terrible and toxic’

It was too much for Big Tonka T. 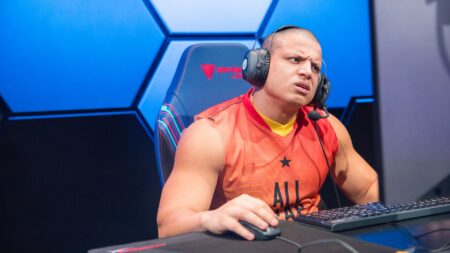 League of Legends streamer Tyler “Tyler1” Steinkamp has returned home after a month of traveling and experiencing solo queue in Korea. His trip to the land of the morning calm did not go as well as he had hoped, especially after playing ranked games and grinding on the Korean server, the world’s hardest LoL server.

In April, the American Twitch streamer announced that he would climb the Challenger rank in all roles in the server with the help of LNG Esports jungler Lee “Tarzan” Seung-yong. Tyler1 stayed in Korea for 30 days to fulfill his personal quest.

What happened to Tyler1 in the LoL Korean server?

During his last stream in Korea, he talked about the difficulties he endured while playing on the server. Most of his matches led to harassment and intentional feeding from his teammates, ruining his playing experience.

“I’m happy to be counting down the seconds until I jump on the plane and fly home,” he said. “I am self-sabotaging the good things I know about League of Legends. I’m feeling even worse, the experience here is a waste of time.”

The Twitch streamer’s main LoL account reached the Master tier, where he mainly played as ADC or jungler under the player name “BIG TONKA T”. While he had overwhelming victories, he also had quite a few defeats where he played with teammates who deliberately ruined games for him. Some players may have recognized the American LoL personality and simply wanted to destroy Tyler in-game.

“I wouldn’t lie when I said it was a bad experience,” he said. “The environment is too toxic.”

On the bright side, Tyler1 saw a spike in his viewership during this time, ranking fourth on Twitch’s most-viewed charts with 15.18 million views per hour.

The Twitch star is one of the few players who have successfully gotten Challenger in all LoL roles—support, bot, top, mid, and jungle. He climbed the North American solo queue ladder in 2020 and used his AD carry expertise to his advantage to begin the mission. In February 2022, he played a total of 450 matches as a support to finally complete the mentally-taxing milestone and cement himself as a highly-skilled and versatile LoL player.