LSB Kael just secured his squad’s salary bonus with one miraculous save.

During their match against T1, LSB owner Doty, who was in attendance, promised that he would give a bonus to the players if they beat this top-performing team. Kael took the words to heart, saving players left and right by any means possible.

16 minutes into game two, Lee “Clozer” Ju-hyeon’s Azir was pushing the top lane by himself, which gave T1 the opportunity to force a 4v5 mid lane fight. Ryu “Keria” Min-seok‘s Blitzcrank started things off by landing a hook on Kael.

The Tahm Kench player initially took the brunt of the engage before T1 changed their focus to Lee “Prince” Chae-hwan‘s Aphelios. Despite working with only 25% of his health, Kael devoured the targeted AD carry and spat him out to a safer location.

After healing and shielding up, Prince retaliated on the remaining T1 members and utilized Aphelios’ Crescendum to bag a triple kill and the ace.

Following the fight, LSB destroyed three outer turrets and secured a 3,000 gold lead that helped them close out the series with a sweep. 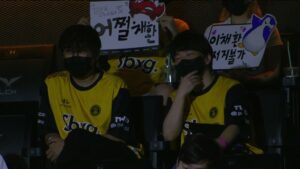 Even though Prince took home the Player of the Game award for game two, he gave a heartwarming shoutout to his bot lane partner during the post-match interview.

“I call him the ogre because he never talks and has no emotion. He’s not that loud, but this time around, I could see that he was so happy after getting a huge win,” he said.

Prince also addressed the LSB owner about his promise and mentioned that they are expecting a pretty hefty bonus since T1 is a big organization.