Arcane secures Emmy nominations for the first time alongside Rick and Morty, What If 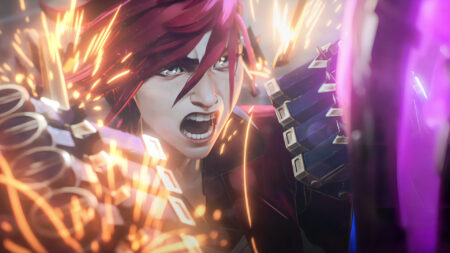 After dominating the Annie Awards earlier this year, Arcane is ready to take on bigger trophies.

In March, Arcane pulled off a clean sweep with nine Annie Awards, winning every category it was nominated in. Awards include Best Writing featuring creators Christian Linke and Alex Yee, and Best Voice Acting by Jinx’s voice actress, Ella Purnell.

This month, Riot Games and Fortiche Productions’ League of Legends series received two nominations at the the Emmy Awards. The prestigious award-giving body is known for its annual Emmy ceremonies where it honors the best shows, series, and personalities in United States television.

The League of Legends series has been nominated for two Emmys in Outstanding Animated Program and Outstanding Sound Editing For A Comedy Or Drama Series (Half-Hour) And Animation. This is the first time Riot Games has been included in the event.

The show will go up against other popular series such as Adult Swim’s “Rick and Morty”, Marvel’s “What If….”, and FOX’s “The Simpsons” for this year’s Outstanding Animation Program award.

For most categories, members of Academy of Television Arts & Sciences (ATAS) voted in June to determine the nominees. Peers hold final voting in August to determine the winners, who will be announced at the Primetime Emmy Awards ceremony in September.

Arcane explores Vi and Jinx’s backstories and lore — how they lived and survived inside the City of Iron and Glass, and how they will eventually gain their powers. Based on the hit multiplayer online battle arena (MOBA) League of Legends by Riot Games, the show has received nothing but high praises from iconic personalities in the gaming community, including Japanese video game designer and director Hideo Kojima.

Find out what makes Arcane a hit series from the creators themselves, and what it took for Katie Leung to portray Caitlyn in our exclusive ONE Esports interviews.