Fans will be assembling to collect the First Avenger’s iconic suit. 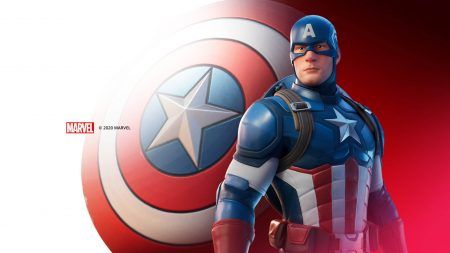 Epic Games announced Cap’s entrance to the game on its official page, detailing that Cap’s iconic red, white, and blue outfit would also include two items: his Proto-Adamantium Pickaxe and Back Bling. “Wield the shield as your Pickaxe, or display it proudly on your back,” the statement advised.

Currently, the skin comes in one style: it features Cap wearing a helmet and half-mask. The bundle costs 2,000 V-bucks (approximately US$20) from the in-game store. There’s another surprise in the form of the Grand Salute Emote, which Epic says you can use “to celebrate Captain America’s arrival.”

Cap’s shield has actually appeared in Fortnite before. Players were given the opportunity to wield it as a special item, in a limited-time Avengers-themed mode last year.

Captain America himself is the fifth Marvel character to make it into Fortnite. Black Widow was previously made available during the Fortnite X Avengers: Endgame crossover event. And, a little while later, Epic released the Star-Lord outfit alongside promotions for the Avengers: Endgame movie.

Meanwhile, Cable, Domino, and Psylocke were all part of the X-Force Outfits Bundle that was released in Chapter 2: Season 2. And players could unlock Deadpool as an obtainable Marvel Series outfit through Deadpool’s Weekly Challenges in Chapter 2, Season 2.