Fortnite Season 3: Splash Down has sharks, whirlpools, and Aquaman

Dive deep into the battle royale once again. 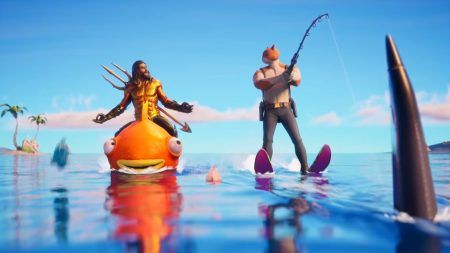 With the Agency blowing up at the end of Chapter 2: Season 2, Fortnite will be sending players into uncharted waters with Season 3: Splash Down.

Splash Down introduces new watery elements to the game, and with most of the map now flooded, players can expect less terrain than usual with hot spots like Pleasant being partially submerged.

The map will also have new naturally occurring mechanics to fit the underwater theme. You can now use whirlpools to launch yourself in the air, but beware, there are sharks in the water that can chomp a hefty portion of your health. If you happen to catch one by surprise, you can use it as a form of quick and deadly transportation across bodies of water.

Epic has also introduced a new type shotgun called the “Charge Shotgun.” The Charge Shotgun allows players to charge a shot for maximum damage. Its highest tier can deal 10.2 damage to a player with a reload time of 4.3 seconds. On top of the new shotgun, players will encounter new NPCs on the map, carrying Mythic items such as Ocean’s Burst Assault Rifle and Jules’ Glider Gun.

Aside from the new additions, players can expect the Hunting Rifle, the P90, and Chug Splashes to appear in-game as this season’s first unvaulted items while the Pump Shotgun enters the Vault to make room for the Charge Shotgun.

Last, but not least, the Battle Pass ushers in a new unsinkable crew for your hire and a new customization feature for gliders. Players can level up and unlock Kit, an adorable kitty that rides out the fight with a robot, and Jules, a master engineer. For a macho hero cameo, Aquaman enters the battle royale as the unlockable skin after you purchase the Battle Pass and complete his set of challenges.

Though the season has started with an unbelievable splash, Epic is bound to add more sea-themed activities and content throughout the weeks to complement the flooded battle royale.