Who is Vinari in DOTA: Dragon’s Blood Book 2? 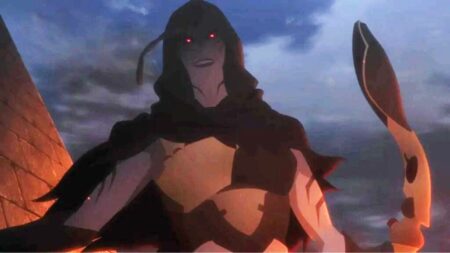 DOTA: Dragon’s Blood book 2 had its fair share of familiar heroes, but the anime hasn’t shied away from adding its own original characters.

Vinari might not have much screen time, but her actions had massive impacts on the events of the show. Her unique character design helps as well, and many have been left wondering just who—or what—she is. And seriously, who can ignore the “cold, calculating bounty hunter” that walks the talk with her very particular set of skills?

Warning: Major spoilers if you are yet to watch DOTA: Dragon’s Blood book 2.

Dota 2 fans might be more familiar with Gondar, but the Dragon’s Blood bounty hunter is no slouch in the unsavory arts.

We first see Vinari capturing Mirana and her allies after luring her into a trap—achieved through the murder of the inhabitants of an allied outpost, then masquerading in plain sight. The Princess of the Moon was snared and found herself an unwilling traveller back to her hometown, the Helio Imperium.

Later, Vinari is called upon once again to deliver yet another blow on Mirana. But this time, it was a call for assassination. The archer manages to land a shot from so far away that nobody could see her, but her arrow that turns her foes into golden statues is a dead giveaway.

What are her golden arrows?

Vinari’s calling card is the power to turn the people she shoots into sparkly gold. For a show that’s not averse to blood and gore, the bounty hunter’s power is a pretty—if horrifying—way to depict death.

Could this power be related to the Hand of Midas? While we’ve not seen explicit references to in-game items, besides a brief cameo from a Shopkeeper and his wars, turning another living being into gold is no mean feat. The bow could be an artifact, or special arrows could be used for this sort of effect.

One climatic moment in DOTA: Dragon’s Blood book 2 was when Mirana was revived despite being rendered golden. It’s not that the shots aren’t lethal, but the revival was probably due to Mirana’s status as the latest incarnation as the Sun, the Source of creation.

While it’s easy to make comparisons to Drow Ranger and Bounty Hunter, Vinari is hiding some pretty nasty stuff under the surface.

She shows her true, toothy face in a confrontation with Luna—and it’s something that will crawl into your worst nightmares.

The split mouth is reminiscent of Night Stalker’s transformation, but Balanar is supposedly the last of his kind. Then again, the show hasn’t been strictly following the official lore, adding their own interpretations when necessary. It’s possible that Vinari is one of the terrifying creatures of the night, but there has yet to be official confirmation.

Who could she be? The answer’s not quite revealed yet in DOTA: Dragon’s Blood book 2. But a new season might reveal more about the mysterious character—and perhaps see her take on a bigger role.