5 Easter eggs in DOTA: Dragon’s Blood that only true Dota fans will spot

Even more secret than the secret shop. 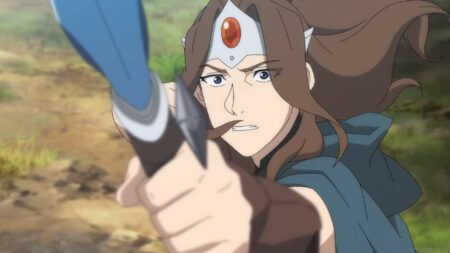 Netflix’s DOTA: Dragon’s Blood immerses fans into the world of Dota with a stunning take on the game’s rich lore.

While the story is beautifully told through the perspective of Mirana, Davion, and Fymryn, there are some intricate details that only true Dota fans will spot.

5. Town Portal Scrolls are a method of transportation

While we don’t see any of the protagonists use them in action, Davion’s assistant, Bram, always has a few Town Portal Scrolls handy.

In the first episode, you can see Bram ride around on his horse with an open compartment filled with scrolls. Later on in the story, Bram pulls out one scroll and offers a small blood sacrifice to activate its magic.

Just like the scrolls in-game, Bram was only able to teleport to friendly territory, namely Dragonhold, the headquarters of the Dragon Knights.

4. The Shopkeeper and his items make a cameo

The Shopkeeper has always been an iconic figure in the world of Dota 2 since its creation. Other than tending to the secret shop of the Radiant side, he was the one who unveiled Dota 2 in its official 2011 trailer.

In episode 2, the enigmatic Shopkeeper makes a quick appearance and pushes the story along by helping Mirana find the Lotuses. Apart from giving Mirana the Gem of True Sight to find the Sage (Invoker), the Shopkeeper has a ton of actual in-game items in his shop like Healing Salves, a Clarity, and a Dust of Appearance. 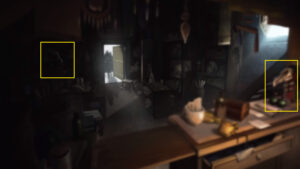 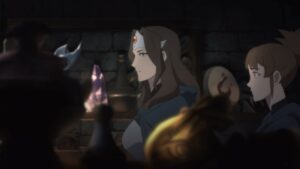 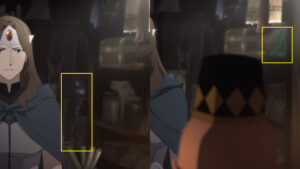 As for the rarer finds in his inventory, we’ve found a Vanguard, a Headdress, a Morbid Mask, a Seer’s Stone, a Scythe of Vyse, a Staff of Wizardry, and a pair of Tranquil Boots.

Aside from the shopkeeper, Davion also heaves what looks like to be a Ring of Regen after feasting on a troop of bandits. I guess his Dragon Blood passive wasn’t kicking in yet.

3. Familiar races are seen amongst the townsfolk

Dragon’s Blood populates its world with elaborate crowds following around our protagonists. Though Davion and Mirana are humans, we get to see various races pop out of the background. 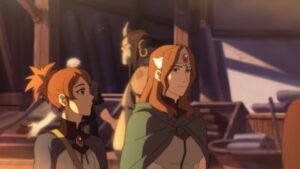 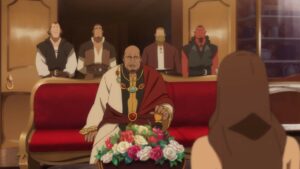 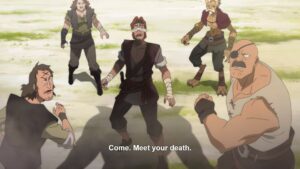 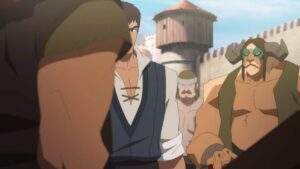 In the second episode, a few bystanders actually look like a few Dota 2 heroes. As Mirana and the crew walked through the town, you can spot an ogre that looks like Alchemist’s ogre.

When Mirana and Marci met Nikdo, Nikdo had a squad of goons to muscle around the duo, one of them being an Oglodi, the same race as Axe.

In the bandit group that attacked Davion, we saw a feline accomplice that looked a lot like the sneaky Bounty Hunter along with a horned townsperson who shared some features with Elder Titan.

While these are quick appearances that add some life to the world of Dragon’s Blood, could this be a subtle nod to which heroes might be seen next in the series? We hope so.

2. The Gem of True Sight shows the reality of things 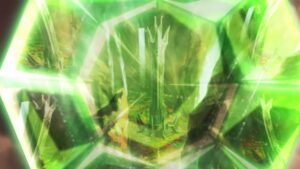 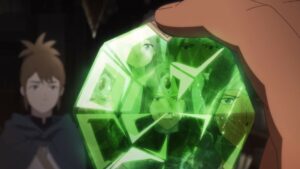 The story places a great deal of importance on the Gem of True Sight. Mirana first receives it from the Shopkeeper as a way to find Invoker and the lost lotuses. With Invoker taking the gem as part of a Shopkeeper covenant, he then uses it to summon the true antagonist of the story, Terrorblade.

Just like its in-game ability, the gem reveals things that aren’t visible to the naked eye. Apart from revealing magically hidden things like Invoker’s tower, the nifty trinket also shows one’s true self.

The second episode features a scene where the Shopkeeper peers through the gem to see the different identities of Mirana. As the middle shows her current self as the Princess of the Moon, the top left envisions Mirana in her innocent youth while the sides of the gem recall her previous role as the princess next-in-line to the Solar Throne.

The gem’s use is fairly minimal in the first book, but we hope to see Terrorblade utilize it to show eager viewers what other secrets are hidden in the world of Dragon’s Blood.

Despite already having fourteen spells in the game to outplay his opponents, Invoker managed to discover a new rejuvenation spell in the animated series.

In episode 7, the adept mage is seen trying to capture the water Eldwurm Lirrak but fails to close out the deed. Tired and spent, Invoker recalls his desperate efforts in trying to save his daughter Filomena by bringing her to her mother, Selemene. 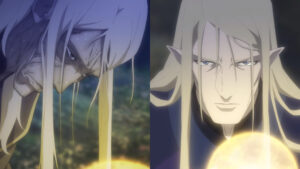 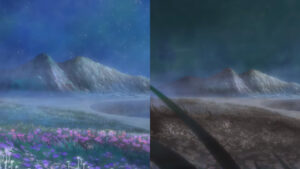 Fueled by anger and frustration towards Selemene’s inaction, the sorcerer pulls out a new spell that siphons the life around him to revitalize himself.

In terms of gameplay, Invoker’s blue orb, Quas, is the one that is supposed to grant increased health regeneration, but the scene shows a yellow Exort orb hovering around him before and after healing.

Though this may not incite any kind of actual gameplay changes, Dragon’s Blood is able to portray how Invoker’s pursuit of magic is powered by his emotional journey. As a mage who knows no boundaries, we believe that Invoker will continue to surprise fans with new spells that have yet to be seen.