All you have to do is read the list. Updated on August 15, at 1:12 p.m. (GMT+8): Arc Warden, Phantom Lancer, Windranger, Axe, and Tiny have been added to the list following the release of Book 3.

Dragon’s Blood Book 2 swiftly followed, premiering January 18 this year, and continues the journey of Davion, the Dragon Knight, and his numerous allies.

Check out who all the Dota 2 heroes in DOTA: Dragon’s Blood are, and in which episode they were first introduced.

Warning: Major spoilers if you are yet to watch DOTA: Dragon’s Blood books 1, 2, and 3.

Full list of Dota 2 heroes in Netflix’s DOTA: Dragon’s Blood and which episode they appear

Book 1 Episode 1 — What the Thunder Said

Oracle is the first hero we see in the anime, in one of the show’s most game-accurate designs—perhaps hinting that he’s watching high above— providing some crucial backstory about the anime’s main villain: Terrorblade.

This is a cool black and white splash of heroes on the battleground, fighting over the Nemesis Stones that make up Radiant and Dire. Think of it as a brief simulation of actual Dota 2 heroes battling in-game, told from Oracle’s perspective, and more evidence that the Oracle—and Terrorblade—are not from the anime’s world.

Big, bad, and flaunting it in the infinite mirrors of reality.

Terrorblade appears much like his game counterpart, and plays a pivotal role in the plot of DOTA: Dragon’s Blood. The villain drives most of the conflict in the show, and any scene he turns up in is a real treat for fans. While he’s first seen in the introductory montage, his real debut comes when he coerces and takes over Fruhling’s soul and body.

Davion’s in-game skill is the direct namesake of the show, but he looks nothing like his in-game version.

He’s younger, more headstrong, ineffably charming, and is still struggling to reconcile his relationship with the Eldwurm Slyrak, Fire Pillar of Creation.

He’s first seen riding to the rescue against an Earth Dragon, deadly creatures capable of wiping out entire parties of warriors.

The proud Princess of the Moon is arguably the series’ most important character. A powerful huntress in her own right, she first crosses paths briefly with Davion and the two’s fates are entwined further down the road.

Mirana is first seen fastidiously asking for a specific drink, only to receive warm beer in disgust. She’s meeting a mysterious contact (with Marci) who promises to help her find the locations of stolen lotuses, powerful artifacts of her goddess Selemene.

She’s a hero now! The first character in the anime to then become a Dota 2 hero, Marci has been Mirana’s staunch servant and protector since childhood. She’s mute, which means she doesn’t speak throughout the show—and communicates exclusively in whistles in-game—but that gives her more time to make adorable faces.

Dragon’s Blood Invoker is no less haughty, but also a lot sadder. He’s well-known as one of the realm’s most powerful—and long-lived—sorcerers, and his machinations affect lowly elves and the highest gods alike.

Unlike the game, this Invoker seems to specialize in a different sort of magic, breaking the laws of spacetime constantly. He’s able to teleport himself and others, and can observe everything through his pools of water. He’s first seen talking to Fymryn, an elf who intruded on his tower after stealing Selemene’s lotuses. Though solitary for a thousand years, his name remains a fruitful source of legends.

The fearsome and merciless captain of the Dark Moon Order, Luna’s first appearance is her being, well, merciless. On a quest to recover her goddess’ stolen lotuses, she’s much less subtle than Mirana.

She tracks down Fymryn, before murdering her closest friends and lovers with her signature glaive and calling upon a Lucent Beam.

Rylai, the Crystal Maiden, is first seen riding in on Auroth, the Winter Wyvern, saving the few remaining knights of Dragon Hold after a brutal offensive from Terrorblade and his wyrmlings.

She would appear only sparingly in the show, but there are hints of her being more than she seems.

Auroth, the Winter Wyvern, proves to be a valuable ally in Davion’s upcoming journey.

She’s one of the few dragons that speak, and still loves the written word as much as her game counterpart. A powerful, ancient creature, but somehow adorable in the right ways, Winter Wyvern manages to steal the show more often than not.

When are we getting the persona?

Lina is a prickly woman with the strength of a nuclear bomb, and ambition to match. She’s introduced to Davion and warms up unexpectedly quickly, striking up a quick but firm friendship.

Lina first got her title—the Slayer—after single-handedly pushing back an arachnid invasion. While the creature looks like Sand King, lore writes that the Sand King takes the form of arachnids, so there’s no explicit confirmation that the creature is Crixalis himself.

Other possible relatives or acquaintances of Dota 2 heroes that appear in Book 2 include Nico Hieronimo, the Pangolier, and Asar, who seems to be an Ursa warrior, as well as a statue of the Arc Warden. 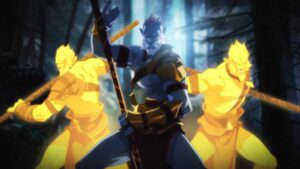 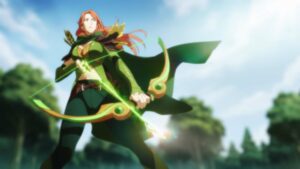 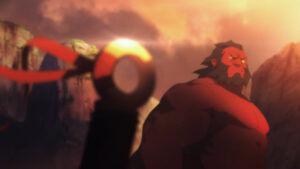 The series digs deeper into the DOTA universe with a few cameos of memorable heroes.

During Filomena’s speech to the Althing, we see a montage of Phantom Lancer, Windranger, Axe, and Tiny getting empowered by the shards of the Mad Moon. Phantom Lancer showcases his skills with a few doppelgangers, and Tiny appears in his largest Grow form against a band of Dark Moon soldiers.

Though the cameos were pretty brief, the young elf addressed them as threats to the Dark Moon Order, which could be explored in a later season.

Initially teased as a statue in Book 2, Zet the Arc Warden plays a bigger role in the latest season of DOTA Dragon’s Blood.

In the reimagined universe where Filomena is alive and well, Invoker is finding ways from stopping the destruction of the Mad Moon. The Arc Warden appears as Invoker’s prisoner on the moon, tasked to unify the fragments of the Dire and the Radiant.

Things turn awry when Zet is overpowered by the fragments who join forces. Invoker puts matters into his own hands by siphoning the energy of the Arc Warden, but the cosmic entity fights back and continues to keep the fragments in check.

The Arc Warden eventually faces his demise when Invoker returns with a magical lotus from Mene. The empowered magician unleashes the Ancients who then consume Zet’s existence, leaving behind nothing but the rage of the Primordial Mind.