What is the legendary Dota 2 TI Aegis? 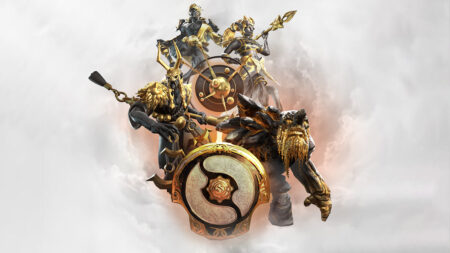 The time has come for a new name to claim the Aegis and title of Champion at Dota 2’s 10th installment of The International (TI10).

The most prestigious esports tournament in the Dota 2 world, winning TI is the end goal for all professional teams, and only true Dota 2 fans understand what it means to take home the Aegis.

What is the Dota 2 Aegis?

The Aegis of Immortality is an in-game item that resurrects its holder if struck down. It can only be obtained by slaying the beast, Roshan, and only lasts for five minutes until it is reclaimed.

Modelled from the in-game item, the Aegis of Champions is given to the winning team of TI for that year. When the next TI comes around, the team who had the Aegis the previous year must return it for the cycle to continue, for one exists in the entire world.

The history behind the TI Aegis of Champions

Brought to life by Weta Workshop in 2012, the same makers behind Lord of the Rings, teams from around the world fight tooth and nail every year to be able to proudly raise the Aegis and say they are the best.

Serving as the trophy for every TI winner since The International 2. The TI Aegis has been claimed thus far by eight teams, with OG being the only team to claim it twice.

Playing a huge part in Dota 2’s history, it serves to remind fans of all the epic moments and plays that lead to each Champion. Every Champion team and its players names are engraved on the back of the Aegis, or as us Dota players like to call it, immortalized in history.

Find out how some of the teams made it to TI10 by watching the Heroes of the Game documentary presented by foodpanda.