How to counter Medusa in Dota 2 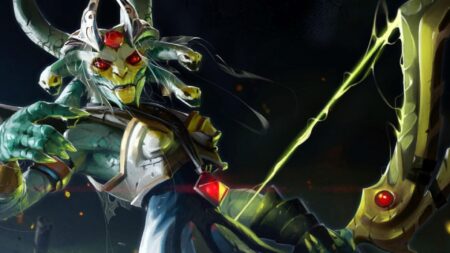 Medusa has a long history of being in and out of the Dota 2 meta. In some patches, the hero seems unstoppable, while in others, she is not picked at all.

Her popularity is well warranted. She is one of the fastest farming carries in the game, she scales incredibly well with items, she is immensely tanky, and she comes with a strong team fight ultimate, that (for some reason) pierces Black King Bar.

And that’s not even mentioning how attractive she is.

Players do have options to counter her in a match. It’s not always easy, but these tricks will help you beat her more consistently.

Dark Seer is an effective counter to most carries in Dota 2. Dark Seer does well in the lane thanks to Ion Shell, which allows him to farm safely. Once Dark Seer has Aghanim, Ion Shell helps his allies tank up while doing significant damage to enemies in melee range.

Dark Seer’s Surge is a great defensive and offensive tool to have. It allows allies to keep a distance away from the enemy. One of Medusa’s biggest weaknesses is how slow she moves. With Surge, Dark Seer can trigger her ultimate, then help his team escape.

Besides his basic abilities, Dark Seer’s ultimate is perfect against her. Wall of Replica creates illusions of enemy heroes. With the right talent, Dark Seer’s illusions are capable of doing even more damage than the original hero.

Since Medusa’s item build tends to be stat-heavy, Dark Seer can therefore can create devastating copies of her that can wipe out a team.

Between his strong laning stage, ability to buff allies, and ability to create powerful illusions, Dark Seer is by far one of the best counters to use against her.

Anti-Mage has one of the best carry-to-carry matchups against Medusa. All of Anti-Mage’s spells are useful against her.

One of Medusa’s few weaknesses is her lack of mobility. She has abysmal movement speed, and functions more like deadly tank than a speedster. This makes Anti-Mage’s blink a fantastic ability against her. It allows Anti-Mage to jump in and out of fights without giving her a chance to counter-attack.

Anti-mage’s best strength is her ability to deplete an enemy’s mana fast. This is bad news for the snake lady, who relies on her mana to tank up and throw out mystic snakes.

Anti-Mage’s Mana Break combined with Manta Style illusions can bring any hero’s mana to zero in seconds. This sets up perfect team wipes with Mana Void.

Anti-Mage isn’t the best carry to have in most games, but between the hero’s high mobility, Mana Break, and one-shotting with her ultimate, she is a fantastic counter to have against Medusa.

Out of all the supports in the game, Nyx is one of the best to have against Medusa as a versatile support who can play position 4 and 5.

Nyx can easily stun Medusa for more than five seconds with his Carapace and Impale combo. Spiked Carapace stuns enemies who hit Nyx while it’s active, and it’s absurdly easy to trigger it on her who have two abilities that target multiple enemies.

After triggering Spiked Carapace, Nyx can follow it up with an Impale, adding an additional 2.6 seconds of stun.

Besides having the ability to disable enemies, Nyx’s ultimate, Vendetta, is fantastic for scouting and setting up kills. Medusa spends a lot of her early game in the jungle farming neutrals, which makes Nyx’s scouting abilities valuable in disrupting her early game.

We established that Nyx can find and disable Medusa pretty easily. The last thing about Nyx that makes him a strong counter is how damaging he is as well.

Because of the stat-heavy items Medusa builds, she is a prime target for Mana Burn. It takes Nyx around 3 casts to fully drain her mana. No other support is this well suited to counter the Gorgon.

Tips and tricks: the importance of controlling the jungle when playing against Medusa in Dota 2

Medusa isn’t a strong carry early game. She is too slow, and her damage and ability to tank are lackluster, so she needs a lot of farm and levels to come online.

This often means that she will go into the jungle and focus on farming creeps as much as possible in the early game to secure the victory for her team later on.

With the knowledge that she will be focusing on farming, the best thing a team can do is block as many of her jungle camps as possible. The easiest way to do that is to spam sentries in the jungle.

It’s of course unrealistic to block the entire enemy jungle for there simply aren’t enough sentry wards to keep that up. However, you can stifle the enemy’s economy with two strategic sentries placed within the triangle in the jungle.

By blocking off the triangle, Medusa will only have half the jungle to farm. This not only takes away the most profitable jungle camps, but it also makes hunting her a lot easier.

Medusa does an incredible amount of physical damage. The hero can solo entire teams if the game goes on long enough. Even pro teams have a hard time killing a farmed Medusa.

This high physical damage is unavoidable, everyone is going to get hit by her during team fights.

Without any auras, the Tiny army for example, took 190-200 damage per hit. With the Aura items mentioned above, that damage is reduced to around 120 per hit.

If Crimson Guard is active, it’s further reduced to 90 damage. That’s a huge amount of damage reduction on a hero with only two base armor.

Multiple aura items are one way to reduce Medusa’s damage, but what if I told you there is a way to stop her from hitting your team entirely?

IceFrog in his infinite wisdom made an item that disarms ranged attackers for five seconds. Not only that, but this debuff cannot be removed.

That’s two ways to itemize against Medusa. Along with good hero picks and shutting her down early, there are a lot of options for players to use when playing against her.

Master a couple of those and the hero should be much easier to deal with in the future.