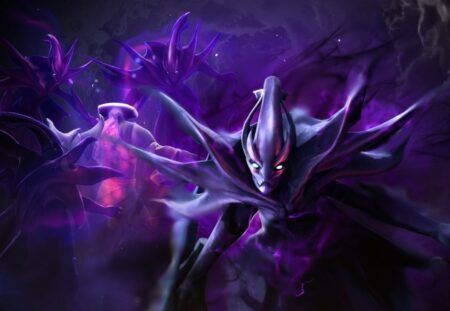 With the conclusion of The International 2020 (TI10) Battle Pass, its accompanying Arcana Vote has also ended, with Spectre defeating Faceless Void to earn the right to be given an Arcana.

“The team will set out to design an Arcana befitting Mercurial, the Spectre, channeling her dark energy into forms heretofore unimagined. How will she haunt her quarry? In what manner can her refraction erode her enemies? When taking aim with her Spectral Dagger, what deadly color will she glow? Yes, purple, obviously, but what SHADE of purple? Sit tight, lavender lovers, plum buffs and violet voters. With time all (or maybe some) of these questions will be answered,” teased Valve.

With her victory, Spectre becomes the sixth winner of the Arcana Vote, which started in TI4, and the 19th hero in Dota to earn an Arcana. Previous Arcana Vote winners include Phantom Assassin, Zeus, Juggernaut, Pudge, Rubick, and Ogre Magi.

The Spectre Arcana will also be the fourth one to have come from the TI10 Battle Pass, with the other ones being Wraith King’s One True King Arcana, Queen of Pain’s Eminence of Ristul Arcana, and Windranger’s Compass of the Rising Gale Arcana.

While there is no definite release date for the Spectre Arcana at this time, the Arcana Vote winners usually get their Arcanas released a year later, right alongside the next TI battle pass.

However, due to the circumstances surrounding the TI10 Battle Pass, we can expect the Spectre Arcana to be released by the time TI10 will happen — currently planned for August next year — at the earliest.

In addition to revealing the winner of this year’s Arcana Vote, Valve announced that they will release some new updates to Dota Plus, including updates to Guilds, a new Dota Plus Season, and a new MMR reset mechanism.