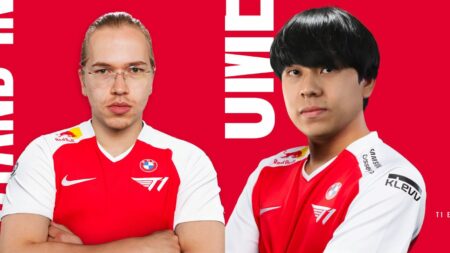 There’s a great disturbance in the force, as if millions of voices suddenly cried out in terror—at least in Southeast Asia.

Former OG stars Anathan “ana” Pham and Topias “Topson” Taavitsainen will be sporting T1 red for the upcoming The International 11 regional qualifiers, the organization announced today. The pair last played together in May 2021 during DreamLeague Season 15, before ana opted to retire from professional Dota.

Ana has since stood in for Team Liquid at the Riyadh Masters 2022 and Royal Never Give Up at the Arlington Major. Meanwhile, Topson has become one of the Dota’s most popular streamers after opting to take a break in November last year.

While ana will be an official T1 member, Topson will play for the team as a stand-in—leaving his status more open-ended.

T1’s new acquisitions will have little time to gel with the rest of the team. In less than two weeks, the TI11 qualifiers are set to begin in a highly competitive region. The likes of Talon Esports, RSG, and Team SMG are gunning for a spot in Singapore.