MidOne says he will be a god again. 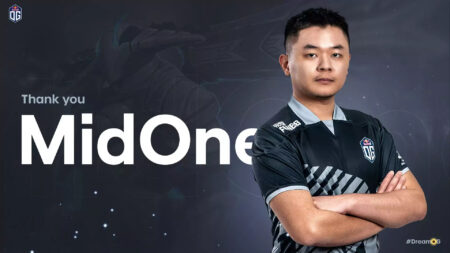 European organization OG officially announced on Monday that it has released Yeik “MidOne” Nai Zheng from its Dota 2 roster.

Through its platforms and social pages, OG explained that the readjustment was necessary, following less than desirable results the past few months.

“From Day 1, MidOne has dedicated all of his energy to this team and has given everything he could to make it work,” the organization detailed, citing that MidOne has been an integral part of OG’s evolution since he started with them in January 2020.

In his time with the team, MidOne notably went from a midlaner, to an offlaner, and then finally taking over the carry role for OG.

The change was made right after OG was unable to qualify for the ONE Esports Singapore Major. At the end of the first DPC Europe upper division season, OG was tied with Team Liquid and Tundra Esports in the standings. Unfortunately, for OG, the squad lost to Team Liquid twice in the tiebreaker matches, knocking them out of qualifying for the Major.

Days before OG made their announcement, MidOne cryptically tweeted, “I will be a god again,” indicating that he is highly motivated to make it to the top of competitive Dota 2 again.

The organization added that it will be welcoming a new carry player approaching the second season of the DPC, with more announcements to come.

READ MORE: Ramzes and Mag will play for Na`Vi at the ONE Esports Singapore Major