The squad has struggled with roster issues all season long. 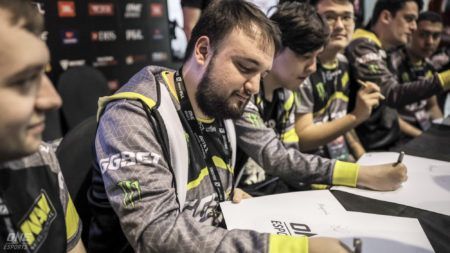 Na’Vi revealed in a post on their official website that they made the decision to bench the majority of its roster “due to unsatisfactory results [in our] last tournaments.”

Na’Vi has failed to place in the Top 4 in its last four tournaments dating back to May. The team was most recently relegated from the OMEGA League’s Immortal Division down to Divine, where they finished in 5th-6th place among other tier two EU/CIS squads.

Na’Vi said that its new roster will be “assembled step-by-step,” with prospects being tested in tournament conditions and the best-performing candidates to be invited to the team. The team has also started to consider suitable candidates for the now vacant coaching position.

“I agree with the fans of the club, who want radical changes. We are starting to restructure the roster and we are looking for various opportunities and solutions that we will consider in the coming months to come up with the best possible option,” said Na’Vi COO Aleksey “xaoc” Kucherov.

Roster issues have plagued Na’Vi all season, starting with the benching and eventual departure of former captain Akbar “SoNNeikO” Butaev in October last year, and Illias being signed in November to fill the gap.

In what apparently started Na’Vi’s downward spiral, Bakyt “Zayac” Emilzhanov suddenly left the team mere days before the qualifiers for the ESL One Los Angeles Major to join Virtus.pro.

Na’Vi ha since struggled to fill the hole left by Zayac, signing Semion “CemaTheSlayer” Krivulya in March only to replace him with Vitaliy “so bad” Oshmankevich in May. Then in June, they replaced midlaner Idan “MagicaL” Vardanian and so bad with young G and Immersion.

Na’Vi will not have much time to replenish its roster if they want to immediately jump back into the competition, as they are set to compete in the ESL One Germany online EU/CIS league, which starts on October 5.