How to counter Luna in Dota 2

The carry queen can be dethroned. 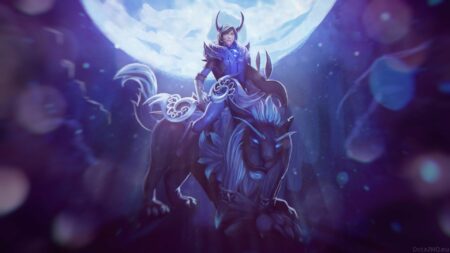 Luna has been one of the premium carries on Dota 2 patch 7.29. Now that the current gameplay is focused on farming stacks and scaling into the late game, she’s by far one of the best carries to have on your team.

Luna is highly contested right now, and is the third most picked carry in the Dota 2 Regional Qualifiers after Axe and Terrorblade. What’s more, she is the 11th most picked hero in pubs. The Moon Rider truly has arrived.

Because Luna is showing up in all levels of Dota 2, it’s a good time to know how to play against her. While the hero is very strong, she can be countered with a few tips and tricks.

Dark Seer is an effective counter to Luna. He does well in the lane thanks to Ion Shell, which allows him to farm safely. Once Dark Seer has Aghanim, Ion Shell helps his allies tank up while doing significant damage to Luna in melee range.

Surge is a great defensive and offensive tool to have for it allows allies to control their distance from the enemy. Luna moves pretty fast, but not fast enough to catch a Surged target.

Besides his basic abilities, Dark Seer’s ultimate is perfect against Luna. Wall of Replica creates illusions of enemy heroes. With the right talent, Dark Seer’s illusions are capable of doing even more damage than the original hero.

Between his strong laning stage, ability to buff allies, and ability to create powerful illusions, Dark Seer is by far one of the best counters to use against Luna.

Medusa is an interesting counter to Luna because Medusa is essentially a better version of the same hero archetype.

Medusa also comes with a lot of spread damage, similar to Luna. However, Medusa’s Split Shot doesn’t reduce her damage as much as Moon Glaives do. Late game Split Shot is also able to apply attack modifiers, which makes Medusa that much stronger.

Besides dishing out more damage, Medusa is also far tankier than Luna, courtesy of her Mana Shield. While Luna can take a couple of hits late game, it’s nothing compared to Medusa, who becomes practically unkillable in the late game.

Lastly, Medusa comes with superior disables with her spells. It’s this combination of traits that makes Medusa more desirable to have on the team.

Of the supports in Dota 2, there aren’t that many effective counters to Luna. Most supports have no way of getting close and safely using their spells, for it’s hard to counter a hero with such large spread damage.

Ice Vortex itself has 1500 cast range. This allows Ancient Apparition to safely throw the spell without having to worry about any counterattack from Luna.

This long cast range also ensures Ancient Apparition is at a safe distance in fights, allowing him to use items like Force Staff and Glimmer Cape to save others.

Tips and tricks: The importance of controlling the jungle when playing against Luna in Dota 2

The current Dota 2 Luna build focuses a lot on jungling. It eschews Lucent beam and focuses on maxing passive skills for faster farming in the jungle. This means that Luna is unable to join in early team fights, and relies on farming jungle creeps to scale.

With the knowledge that Luna will be focusing on farming, the best thing a team can do is block as much of her jungle camps as possible. The easiest way to do that is to spam sentries in the jungle.

It’s of course unrealistic to block the entire enemy jungle for there simply aren’t enough sentry wards to keep that up. However, you can stifle the enemy’s economy with these two strategic sentries placed within the triangle in the jungle.

By blocking off the triangle, Luna will only have half the jungle to farm. This not only takes away the most profitable jungle camps, but it also makes hunting her a lot easier.

Tips and tricks: Always build defensive Aura items on your hero when you’re up against Luna

While the best way to deal with her is to kill her before team fights, that isn’t always possible. It’s likely there will be a full-on team fight involving everyone at some point in the game, so why not prepare for it?

Crimson Guard, Assault Cuirass, and Pipe of Insight all do an amazing job of mitigating AoE damage. By buffing everyone’s resistance, it significantly reduces the effectiveness of all incoming spread damage.

Of course, all these items are quite expensive, and there are cheaper alternatives. Vladimir’s Offering offers a decent amount of armor. Even a casual Buckler can help a team out. Ring of Aquila is also worth holding on to for the aura. These items won’t have as big an impact but every little bit helps.

Those are some of the tips and tricks players any player can use to significantly improve your chances of beating the Moon Rider hero. Happy Dota 2 pubbing!