How to counter Juggernaut in Dota 2 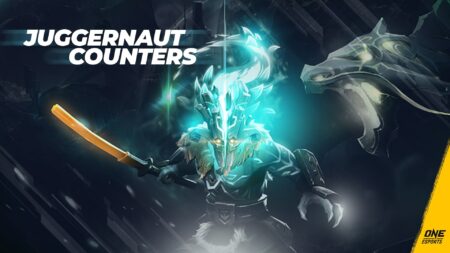 With an impressive win rate across all ranks, Juggernaut remains as one of the most popular core picks in Dota 2. He, who also goes by the name Yurnero, is mostly used by Herald to Ancient ranked players according to Dotabuff.

Additionally, he has also been slightly buffed in the latest Dota 2 7.30 patch.

His unique set of abilities allows Dota 2 players to utilize a variety of play styles — from an aggressive lane dominator to a defensive farming core. His impact from early to mid game offers snowball potential that leads to victory.

Juggernaut may have the complete package as a core hero, but that does not mean he’s invincible. Just like other Dota 2 heroes, there are solid counter strategies that can be applied against him.

Axe is one of the best counter hero picks against Juggernaut for multiple reasons. Axe’s Berserker’s Call ability bypasses Juggernaut’s Blade Fury, which the latter often uses as an escape mechanism. With this Axe ability active, Juggernaut will not be able to run away or teleport to safety.

Berserker’s Call also provides a ton of armor, which greatly negates the damage from Omnislash.

Axe’s ultimate ability, Culling Blade, also goes through Blade Fury in the same way Berserker Call does. This ability can be very fatal to Juggernaut when caught below its low health threshold.

Counter Helix is also very effective against Juggernaut, for this passive ability can proc while Juggernaut’s Blade Fury is active.

During a lane match up, an aggressive Axe has the ability to delay Juggernaut’s early farm, effectively slowing down the progress of the latter’s first core item.

While Juggernaut shines as an early to mid game fast-farming core, you can easily counter him with an Axe pick.

Chaos Knight (CK) is a situational counter core pick against Juggernaut because of the difference in their core tier levels. Chaos Knight’s peak is from mid to late game, a contrast to Juggernaut’s early to mid game flair.

However, make no mistake, because Chaos Knight’s kit is still effective against the melee swordsman’s abilities regardless.

There is a popular combo that Chaos Knight players usually pull off against Juggernaut players. First, you should aim to catch an unsuspecting Juggernaut with Chaos Knight’s Chaos Bolt.

Next, maximize Chaos Knight’s disable duration by following up with his gap-closing ability, Reality Rift. Finally, end the combo with Phantasm to deal tons of damage to Juggernaut. Reality Rift works similar to Axe’s Berserker’s Call, especially since the two abilities both bypass Blade Fury.

Eventually, the dark knight will outperform the masked swordsman in the late game. In a situation where the two Dota 2 heroes have the same amount of farm, Juggernaut will no longer be able to dish out enough damage to bring down Chaos Knight in the late game.

Winter Wyvern may not be the easiest hero to use when it comes to countering Juggernaut. However, in the right hands, she can be a real pain.

During the early game laning stage, Winter Wyvern’s Splinter Blast ability can disrupt the skill order of Juggernaut players. This ability forces the enemy to prioritize upgrading his Healing Ward ability to offset the damage taken from Winter Wyvern, especially when they are out of healing items.

Another thing that’s annoying for Jugg players is Winter Wyvern’s Cold Embrace ability, especially when it’s being used on players targeted by Omnislash.

It greatly helps players survive the wrath of Omnislash when used at the right time. This ability can also be used to sustain yourself or an ally targeted by Blade Fury in the early game.

What’s more, Winter’s Curse can kill Jugg or his nearby teammates. While this ability can be quite tricky to use, especially for beginners, it reaps massive results.

Tips and tricks: How to play against Juggernaut’s signature abilities in Dota 2

Jugg players are very aggressive in the early game, for they tend to take advantage of Blade Fury’s damage while flash farming for their first core item. This just means players will have to adopt a more defensive playstyle.

Escape abilities such as Mirana’s Leap, Windranger’s Windrun, or Dark Seer’s Surge will negate any damage from Blade Fury. Run away as fast as you can while Blade Fury is active.

Blade Fury is actually Juggernaut’s defensive skill. Whenever it goes on cooldown, this melee swordsman is very vulnerable to disable and nuke abilities. Utilize this window of opportunity to either harass or kill him.

Veteran players who are already used to countering Juggernauts usually play the mental game by baiting him to use his Blade Fury. To secure a kill against Jugg, have an ally with a nuke or disable ability gank your lane as soon as Blade Fury is down.

Omnislash is a high-damage, single-target ability that is often fatal to lone players. Counter this by sticking to a teammate, an ally creep, or a neutral creep. This will distribute Omnislash’s damage and even transfer its effect completely to nearby allies.

Items to build to counter Juggernaut

Items Eul’s Scepter of Divinity or Ghost Scepter also nullifies his killing potential. These items are usually bought by heroes with no escape mechanisms.

For players with a higher skill cap, Lotus Orb is an ideal item. It perfectly reflects Omnislash albeit it requires a good amount of timing.

Tips and tricks: Shutting down a Juggernaut

Juggernaut’s power peaks at mid game where he usually obtains a core item or two. These items help him dish out a lot of damage using Omnislash and Blade Fury.

To shut him down, secure kills against him in the early game. You can do this by either rotating a mid player teammate to his lane or pairing up with a teammate with nuke and disable abilities to slow down his item progression and delay his power spike.

He also falls short as a core late game hero compared to other cores like Chaos Knight as mentioned earlier, so delaying his power spike would simply not suffice. Try to disrupt his farming patterns all throughout the game to counter his strengths as a core.