The two teams are the ninth and 10th teams announced. 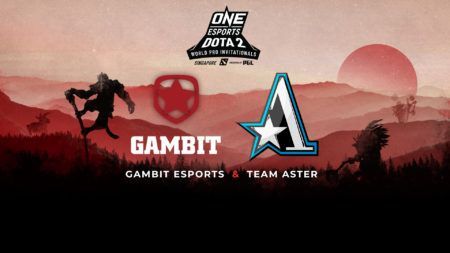 CIS team, Gambit Esports, hot off their grand finals appearance at ESL One Hamburg, and Team Aster, who were the first Chinese squad to qualify for the MDL Chengdu Major, will be flying to Singapore in December to join the ONE Dota 2 World Pro Invitational tournament.

Gambit Esports are one of the rising stars of the CIS region. The squad put in a dominant performance at the MDL Chengdu Major CIS qualifiers earlier this month, finishing in first-place over powerhouse CIS teams like Natus Vincere and Virtus.pro. They followed it up with a strong run at ESL One Hamburg last weekend, only narrowly losing 2-3 to an on-fire TNC Predator in the grand finals.

Team Aster is looking like one of the strongest teams of the 2019-2020 DPC season thanks to the additions of ex-Newbee superstar mid-player, Song “Sccc” Chun, and ex-Vici Gaming captain, Pan “Fade” Yi, in the offseason.

At the MDL Chengdu Major China qualifiers, Aster finished at the top of their group, with impressive victories over RNG and Newbee, and were the first Chinese team to qualify after defeating EHOME 2-1 in the playoffs.

The ONE Dota 2 Singapore World Pro Invitational will take place on December 20-22 at the Singapore Indoor Stadium, and will feature a total of 12 teams competing for a share of the US$500,000 prize pool.