Why Fae Grenade is explosively overpowered in Dota 2

All eyes on Earthshaker. 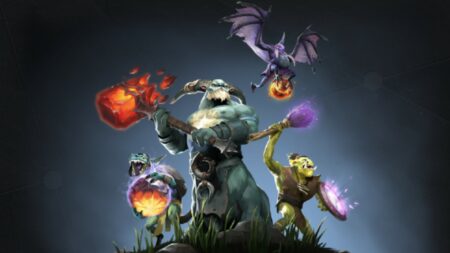 One of the newly released tier 2 items is Fae Grenade. The new item doesn’t provide many stats, but its active, Shadow Mark, is one of the most useful neutral item abilities in the game.

Shadow Mark can be used to track enemies

The obvious use of Fae Grenade is the ability to reveal enemies, for Shadow Mark tracks its target for seven seconds. During those seven seconds, the marked enemy will be exposed to all allies, making it easier to bring them down.

Its cast range of 900 means it’s better to equip it on melee heroes who are in the thick of team fights, as opposed to ranged heroes who would have to expose themselves to use the active.

It’s important to remember however, that the ability doesn’t provide True Sight, and can be dispelled.

Around the 17 minute mark is when most offlane initiators will have Blink Dagger ready. It’s also the time when teams start grouping up to take objectives and team fights start breaking out.

Fae Grenade is the perfect counter to have at this point of the game. It can prevent enemies from blinking for 11 seconds after being used.

Shadow Mark applies the user’s damage in the first tick, then does seven ticks of 20 damage a second for seven seconds. After those seven ticks, Blink Dagger still requires three more seconds to cooldown. That’s a lot of downtime for Blink Dagger.

Countering a 2,250 gold item with a free neutral item is simply priceless in Dota 2 patch 7.30b.

Fae Grenade deals 140 damage, plus 100% of the user’s attack damage when used. While other tier two neutral items focus on providing stats, none can compare to the raw damage output that Fae Grenade brings.

Dealing 140 magical damage means it is buffed by the user’s magic amplification and reduced by magic resistance; a solid amount of damage in the mid game.

The bonus 100% attack damage from the user is what makes Shadow Mark powerful. Giving Fae Grenade to heavy hitters such as Sven will boost his ranged attack by 300 damage.

Shadow Mark also has certain combos with specific heroes that make it borderline overpowered. When Fae Grenade is used with Earthshaker’s Enchant Totem, it applies the full bonus damage to the enemy without consuming his Enchant Totem charge.

Besides Earthshaker, other heroes also benefit from the bonus attack. Bounty Hunter is able to use Shadow Mark to apply the bonus damage from Jinada without putting the skill on cooldown.

Invoker also benefits from using Shadow Mark, for its damage over time synergizes perfectly with Cold Snap, providing the same value as an Urn of Shadows without taking an item slot.

When Batrider uses Shadow Mark, he fully benefits from the bonus damage from Sticky Napalm. This combo provides Batrider with a second Flamebreak during the mid game, a damage boost that no other item can duplicate.

Fae Grenade has been out since the launch of Dota 2 patch 7.30. It is likely that there are more combos available for the item, just waiting to be discovered.